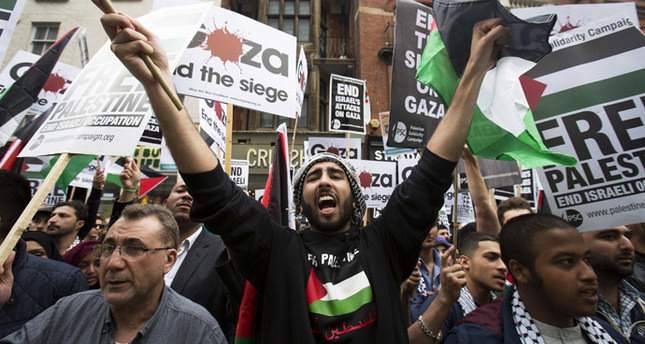 Demonstrations have been staged in countries across the world to protest against Israel's continued military assault on the Gaza Strip.

In New Delhi, activists from numerous student unions shouted slogans during a protest yesterday outside the Israeli Embassy.

In Damascus hundreds of Syrian protesters waved Syrian and Palestinian flags during a rally organized by the ruling Baath party in front of the
United Nations office in Damascus.

In Jalalabad, Afghanistan, hundreds of protesters staged a protest demanding that the international community take action to stop Israeli attacks on the Gaza Strip.

Muslims also gathered across Indonesia to denounce Israel's latest campaign on the coastal enclave. Many activists in Berlin also staged demonstrations as people across Germany also rallied under the slogan "Free Palestine."

Israel launched its offensive last Tuesday and the violence has continued despite diplomatic efforts to halt the bloodshed. On Sunday, Israel sent Special Forces into Gaza to conduct a ground operation, the first such operation in this latest round of fighting.
Last Update: Jul 15, 2014 11:58 am
RELATED TOPICS