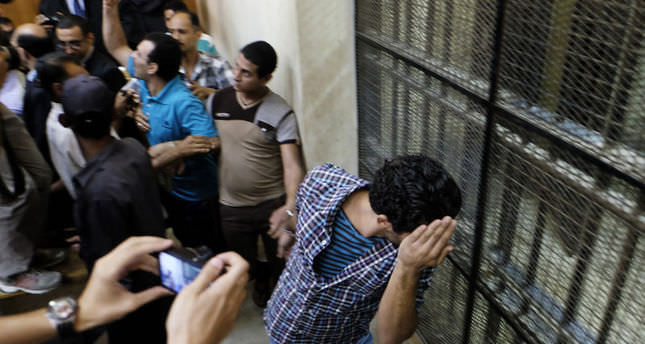 by AA Jul 16, 2014 12:00 am
An Egyptian court on Wednesday sentenced seven people to life in prison for alleged involvement in several incidents of sexual assault that occurred in Cairo's Tahrir Square last month.

The court also sentenced two other defendants to 20 years each in prison.

A judicial source described Wednesday's verdict as preliminary, saying it could still be appealed.

Upon hearing the verdict, the defendants broke into tears, with some loudly proclaiming their innocence.

The cases come amid a series of trials being heard by an Egyptian court in connection with reported sexual assaults on seven women in Tahrir Square during rallies held early last month to celebrate the inauguration of new Egyptian President Abdel-Fatah al-Sissi.

Some of the victims were stripped naked and robbed during the mob assaults, which prosecutors have designated as "attempted rape."

Al-Sisi publicly apologized to the woman, who had been stripped of her clothes and severely bruised by dozens of attackers.

The legislation calls for between six months and two years in prison for violators.

Around 84 percent of Egyptian woman say they have been subjected to verbal or physical sexual harassment, according to a 2012 study by the Egyptian Center for Women's Rights, a local NGO.

Over the past two years, numerous incidents of mob sexual assault have been reported during demonstrations in Tahrir Square. The video of last month's mob assault, however, provided the most graphic footage yet of such an attack.