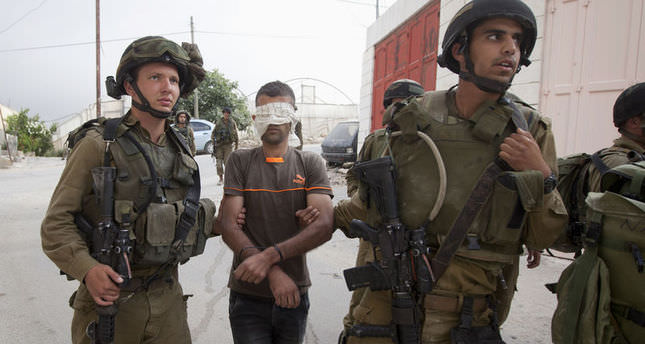 by AA Jul 17, 2014 12:00 am
The Israeli army has detained 1104 Palestinians in the occupied West Bank since the disappearance and the subsequent death of three Jewish teens in mid-June, a Palestinian NGO has said.

In a Wednesday statement, the Palestinian Prisoners' Society said that the detained Palestinians included 27 lawmakers as well as 60 ex-detainees who were released as part of a 2011 prisoner swap between Hamas and Israel.

Israeli authorities have been launching a restless campaign of detention in the occupied West Bank since three Jewish teens went missing from a southern West Bank settlement on June 12.

Israel warplanes have also been pounding the Gaza Strip since July 7, killing at least 230 Palestinians and injured more than 1700 others.

Israel claims that the offensive-dubbed "Operation Protective Edge"-aims at halting rocket fire from the Palestinian territory.