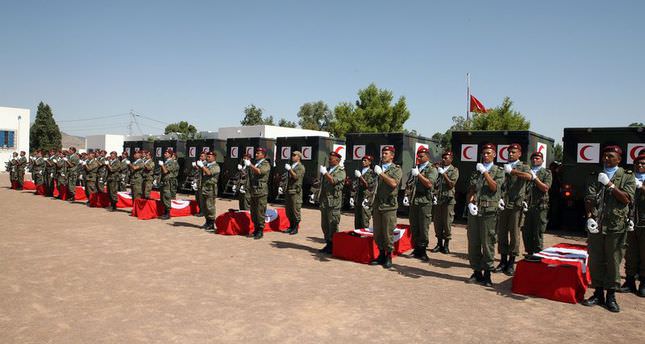 by AA Jul 17, 2014 12:00 am
Fourteen Tunisian military personnel were killed and 20 others injured in overnight clashes with militants in the western Kasserine province, the Tunisian Defense Ministry said in a statement on Thursday.

The clashes erupted when militants attacked two army checkpoints in Kasserine simultaneously late Wednesday night, according to an earlier statement by the Tunisian army.

The statement said the militants attacked the checkpoints with rocket-propelled grenades and machine guns coming in from the Jebel ech Chambi, which looms over the city of Kasserine.

Since last July, the Tunisian army has been carrying out operations against militants holed up in the mountainous Jebel ech Chambi area. The army says it is searching for "terrorists" accused of killing eight Tunisian soldiers in an earlier attack.

No specific date has been set for the end of the military operations in the area.