Death toll in Gaza increases to 227 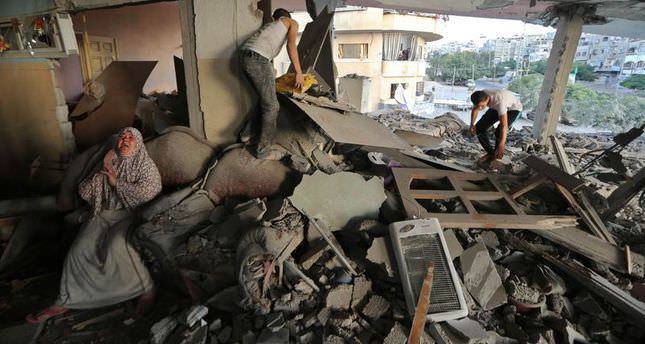 by AA Jul 17, 2014 12:00 am
A man was pronounced dead early on Thursday, raising the number of Gaza Strip residents killedto 227 since Israel has started its ongoing offensive on Gaza on July 7, a Health Ministry official said.

The man succumbed to wounds he sustained in an Israeli airstrike on the central Gaza city of Deir Al-Balah, Health Ministry spokesman Ashraf al-Qodra added.

He added that 1685 other Gazans were injured since the beginning of the offensive.

Gaza has been pounded by Israel from land, air and sea for nine days now, since Israel started its "Operation Protective Edge" offensive with the aim of debilitating the military capabilities of its resistance factions.

However, instead of incapacitating the resistance factions, Israeli planes, warships and tanks have left a tragic human toll behind in Gaza, producing an Arab outcry.

Gaza-based resistance factions have met the Israeli attacks with barrages of rocket attacks, some of them have struck at the heart of the Israeli capital Tel Aviv and some other northern cities, sending fear down the spines of almost everybody in the self-proclaimed Jewish state.

Al-Qodra said a Palestinian was killed early on Thursday in an Israeli airstrike on northern Gaza. He added that Israeli warplanes targeted a group of Palestinians who were on their way to a mosque to perform the dawn prayer, killing an elderly man and injuring three others, a short time earlier.

The Health Ministry spokesman said a woman on Thursday also succumbed to wounds she sustained on Wednesday in an Israeli airstrike on the southern Gaza city of Khan Younis.

On Wednesday, the Health Ministry released a list containing the identities of the dead victims of the Israeli offensive on Gaza so far.

The dead victims included 47 children, 27 women and 15 elderly Gazans, according to the list of the Health Ministry.