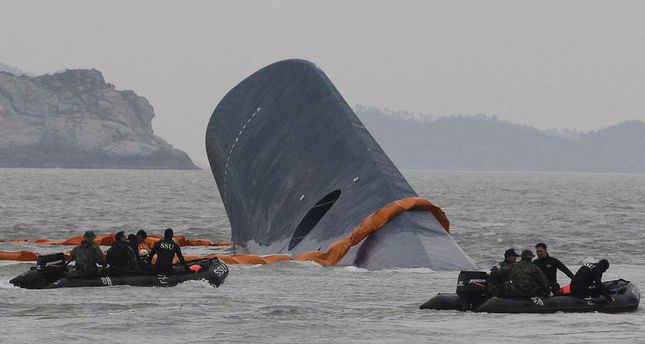 by AA Jul 17, 2014 12:00 am
Months after the Seuol ferry sank off South Korea's coast, the search for victims continued to claim lives Thursday - five firefighters dying when their helicopter crashed while returning from looking for the remaining passengers at sea.

The chopper came down in the southwestern city of Gwangju shortly after beginning a planned journey from the site of the ferry's sinking to a base in the country's northeast.

Images on Korean television showed a plume of dark smoke rising from the burning chopper above buildings.

Local news agency Yonhap reported eyewitness claims that the aircraft had caught fire in the air before nose-diving into a street shortly before 11 a.m. - one onlooker said "a plume of black smoke rose with a loud bang."

Yonhap reported that despite a high school student being hurt when she was struck by debris, the casualties were restricted to the helicopter's crew of five firefighters, who had joined the Seuol search effort on Monday.

The search continues off South Korea's southwestern coast as 11 passengers remain missing since the ferry sank on April 16 – the official death toll stands at 293.

While a post-Seuol disaster investigation and court trials continue, public safety has been high on the national agenda amid an outcry over the government's lax enforcement of regulations.

In the case of the helicopter, the crash site is being examined for any clue as to what could have caused it to come down. The National Emergency Management Agency has insisted the chopper was only introduced in 2001, and that "the service life of firefighting helicopters is usually 20 years."

For now, it is viewed as yet another tragic incident in the long-running saga – two search divers and a navy sailor have also lost their lives looking for victims in and around ferry.