Syria's Assad sworn in for new 7-year term as president 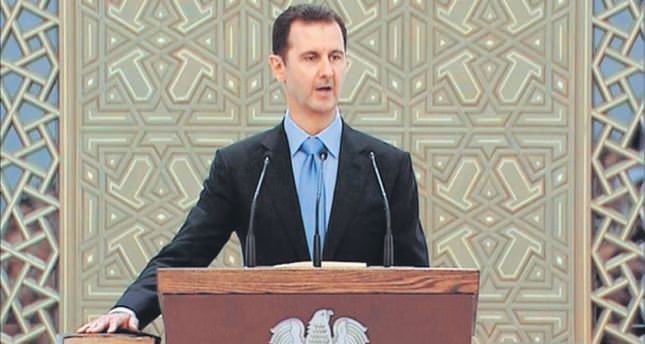 Syrian President Bashar Assad was sworn in yesterday, marking the start of his third seven-year term in office amid a bloody civil war that has ravaged the country

The TV showed Assad arriving at the People's Palace in the Qassioun Mountain, the scenic plateau that overlooks the capital from the north. A band played the Syrian national anthem after which Assad was seen walking a red carpet past an honor guard into a hall packed with members of parliament and Christian and Muslim clergyman. Wearing a dark blue suit and a blue shirt and tie, Assad placed his hand on Islam's holy book, the Quran, pledging to honor the country's constitution. "I swear by the Almighty God to respect the country's constitution, laws and its republican system and to look after the interests of the people and their freedoms," he said.

Assad blamed Western and Arab governments for supporting opposition groups saying "They will pay dearly for backing those who took up arms against him."

In a triumphant speech delivered after he took the oath of office at a red carpet ceremony in Damascus, Assad branded the 2011 Arab uprisings a "fake spring". Assad, 48, won a June election denounced as a "farce" by his detractors as it was staged more than three years into a devastating war that has killed more than 170,000 people and uprooted millions. "Syrians, three years and four months... have passed since some cried 'freedom'," Assad declared, referring to the 2011 revolt. "They wanted a revolution, but you have been the real revolutionaries. I congratulate you for your revolution and for your victory,"

Assad told his supporters. "Those who lost their way can now see clearly... the monstruous faces have been unveiled, the mask of freedom and the revolution has fallen." Assad's inauguration comes with much of the world's attention focused elsewhere, as violence engulfs Iraq and Gaza even though his troops continue to pound rebel-held areas of second city Aleppo.

During the first two years of the Syrian revolt, which began as a peaceful protest movement before transforming into an armed rebellion, the opposition's Western and Arab supporters repeatedly insisted he must step down. More than 1,000 people were invited to Wednesday's inauguration, with Assad arriving at the presidential palace in a black sedan car before being met on the red carpet by a military band.

Parliamentarians and other guests cheered for Assad in the hall where he spoke. The opposition National Coalition branded the election a "farce" even before it was staged, in a statement later echoed by U.S. Secretary of State John Kerry and NATO chief Anders Fogh Rasmussen.
Samir Nashar, a veteran dissident and member of the coalition, admitted the world's attention has turned away from Syria. "The situation in the Middle East is changing very fast. Unfortunately for Syrians, the instability has distracted the international community's attention," he said.
Nashar said Assad had managed to portray his regime as a more acceptable option "in comparison to ISIS, especially in the eyes of European
countries."
RELATED TOPICS