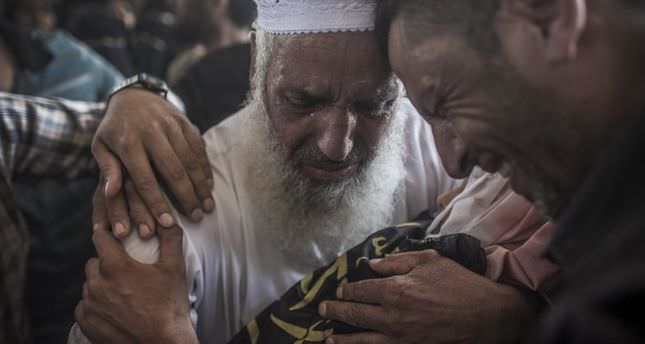 by AA Jul 17, 2014 12:00 am
Just moments before a five-hour ceasefire comes into effect, Israeli warplanes pounded the Gaza Strip, killing three Palestinians and wounding four others.

The airstrike came just moments before the U.N.-proposed five-hour ceasefire come into effect at 7am GMT with the aim of allowing the entry of humanitarian aid to the residents of the embattled strip.

Earlier in the day, Israeli army spokesman Avichay Adraee said Israel would suspend military operations in Gaza for five hours on Thursday to allow the delivery of humanitarian aid.

Israeli warplanes have been pounding the Gaza Strip since July 7 with the stated aim of halting rocket fire from the besieged coastal enclave.

The latest fatalities brought up to 230 the number of Palestinians killed in the Israeli air offensive, now in its second week.

Around 1698 Palestinians have also been injured, many seriously, by the Israeli aerial attacks.