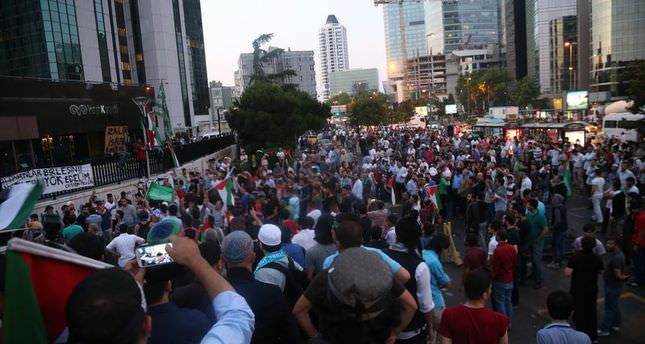 by AA Jul 18, 2014 12:00 am
Israel has scaled down its diplomatic presence in Ankara following angry demonstrations outside its diplomatic missions in Turkey due to its ongoing military onslaught on the Gaza Strip, in which at least 264 Palestinians-mostly civilians-have been killed so far.

Following the clashes, Israeli Foreign Minister Avigdor Lieberman said in a statement that he had ordered the recall of the families of Israeli diplomats based in Ankara and Istanbul.

Lieberman went on to blame Turkish security officials for "not taking action" to prevent the violence, holding Turkey responsible for the well-being of foreign diplomats stationed there.

Early Friday, protests broke out in several Turkish cities to protest Israel's ongoing assault on the Gaza Strip, which has left at least 264 Palestinians dead-and more than 1970 others injured, many seriously-since it began on July 7.