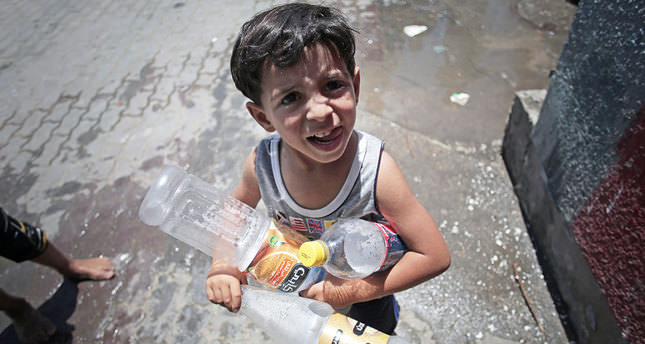 by AA Jul 18, 2014 12:00 am
Israel's ongoing air, naval and ground attacks on the blockaded Gaza Strip have deprived hundreds of thousands of Palestinians of water.

He said that Israeli planes had attacked a water tanker in the southern Rafah city, killing its driver.

"The attack has left all municipal workers in panic," Abu Radwan said, going on to say that many workers refuse to leave their workplaces in concern for their safety.

"As a result, vast swathes of areas in Rafah are deprived of water for the past eight days," he said.

Since July 7, Israel has been pounding the Gaza Strip with air and naval bombardment with the stated aim of halting rocket fire from the Palestinian territory.

At least 260 Palestinians have been killed and more than 1980 injured since the Israeli onslaught began on July 7. One Israeli has also been killed.

The International Committee of the Red Cross (ICRC) has earlier warned that hundreds of thousands of Palestinians live without water in the Gaza Strip.

ICRC head in Gaza Jacques de Maio said that the ongoing Israeli attacks have destroyed water and electricity networks in the Gaza Strip.