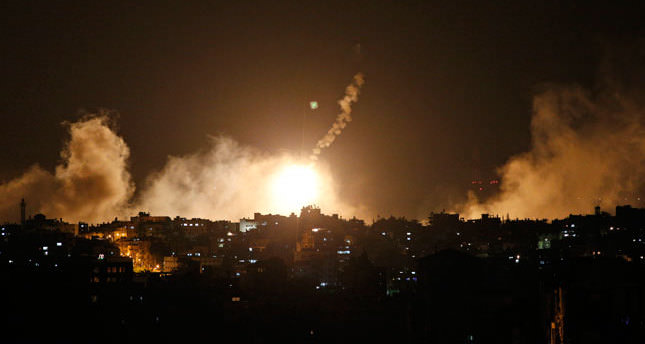 by Anadolu Agency Jul 18, 2014 12:00 am
The United States supports Israel in its efforts to halt rocket fire from Gaza into its territory, US President Barack Obama says. The EU Friday expressed great concern about the escalation in the Gaza strip following the Israeli ground attacks.Maja called for an end to rocket attacks by Palestinians on Israel and to the end of killing of civilians by Israel.

"The EU is in contact with partners in the region and globally to push for a ceasefire," she stressed.

"These events make efforts to establish ceasefire even more urgent and we reiterate Our call to both sides to deescalate the situation to end violence and to end suffering of the ivilian population," Maja Kocijancic, spokesperson for EU High representative Catherine Ashton, told a news conference here.

Obama says he spoke with Israeli Prime Minister Benjamin Netanyahu about the military operations in Gaza and offered US support while also expressing concern about the risk of escalating the conflict.

"We are hopeful that Israel will continue to approach this process in a way that minimizes civilian casualties and that all of us are working hard to return to the cease-fire that was reached in November of 2012," he says.

US Secretary of State John Kerry is working to support an Egyptian ceasefire proposal and is prepared to travel to the region, Obama says.