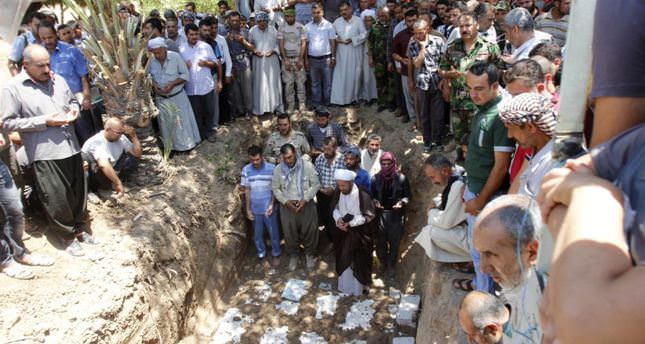 ISIS has been making rapid gains in Syria in recent weeks, mostly by seizing territory from rival rebel groups using weaponry brought in from Iraq, where last month it managed to take large areas from government forces. Activists say the Syrian air force has in recent weeks stepped up attacks on positions held by ISIS. The group launched an attack against the Shaar gas field east of Homs Thursday morning, killing at least 23 of the men guarding it in a "wide assault" from several directions, the Britain-based Syrian Observatory for Human Rights said.

The Observatory, which monitors violence in Syria through a network of sources in the country, quoted "trusted sources" as saying 340 other guards, government forces and militia members loyal to Assad had been taken prisoner, wounded or killed. "Since the beginning of the year there has been clashes between ISIS and the regime in some areas, but these are the largest," the Observatory's director Rami Abdul-Rahman said. Previous large clashes between government forces and ISIS had usually involved other rebel groups, he said. The two sides have also skirmished continuously in other areas but casualties had been relatively light, Abdul-Rahman said. It was not immediately possible to verify the report. Syrian state media made no mention of the attack. About 30 had managed to escape to the nearby Hajjar field, the Observatory report added.

Another clash between the Syrian regime and ISIS erupted when ISIS started assaults on Deir al-Zor airport. Deir al-Zor airport is one of the last key strategic locations in the province out of the control of Islamic State, which has also seized swathes of territory across the border in northern and western Iraq.

The Syrian army responded by bombing areas around the airport, which supplies its forces in the east of the country, the British-based Syrian Observatory for Human Rights said. There were no details of casualties. Capturing parts of the province has helped Islamic State link up territorial gains across Syria and Iraq, where it overran the northern city of Mosul in June. Last month it also declared an Islamic caliphate in territory it controls in both countries. Islamic State expelled rival rebels from Deir al-Zor city on Monday, tightening its hold on the oil-producing province bordering Iraq. ISIS has previously taken control of oil fields in Iraq as well as in Syria's eastern Deir al-Zor province. The group was once the Iraqi affiliate of Al-Qaeda, but Al-Qaeda disowned it in February after tensions mounted over its expansion into Syria.

The Observatory says more than 170,000 people have been killed in Syria's conflict, which started as a peaceful protest movement in 2011 but descended into a multifaceted civil war after a government crackdown.