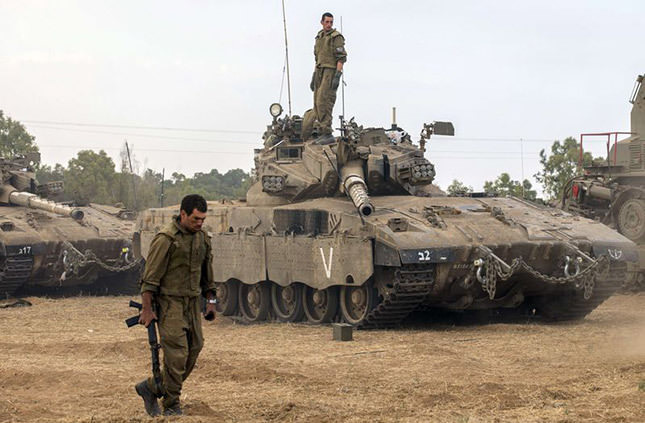 by AA Jul 19, 2014 12:00 am
The Ezzeddin al-Qassam Brigades, the military arm of Hamas, said on Saturday that six Israeli soldiers were killed along with one of its fighters in an operation in an area opposite the central part of the Gaza Strip.

"One of our select units, which was made up of 12 mujahedeen, managed to infiltrate into the site in a new and stunning blow," the brigades said in a statement.

It added that its members, who hid for six hours in the area, had ambushed four Israeli military vehicles, destroying three of these vehicles, killing six soldiers and wounding others.

The brigades noted that its fighters had also seized two M16 rifles from the Israeli soldiers.

It said 11 fighters managed to return after the operation, while the 12th fighter was killed.

The Israeli army announced earlier in the day that two army personnel were killed in clashes with Qassam fighters who tried to infiltrate into Israel.

Since July 7, Israel has been pounding the Gaza Strip, home to some 1.8 million Palestinians, with crippling air and naval bombardments with the ostensible aim of halting rocket fire emanating from the strip.

On Thursday night, Israel stepped up its offensive to include ground operations, sending troops into the embattled coastal enclave.

At least 341 Palestinians have been killed and nearly 2560 injured in relentless Israeli attacks on the Gaza Strip, according to Palestinian health officials.