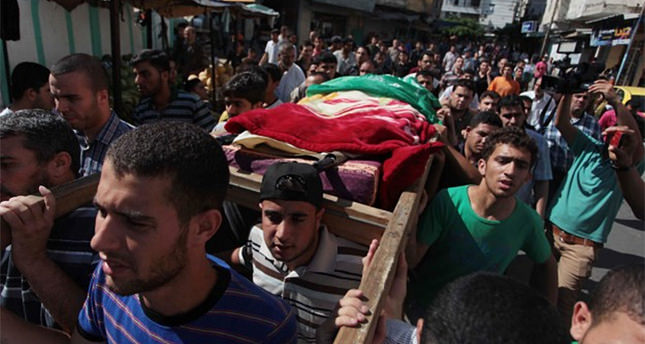 by AA Jul 20, 2014 12:00 am
The older son of senior Hamas leader Khalil al-Hayah, his wife and two sons were killed in a fresh Israeli attack in eastern Gaza Strip on Sunday.

Scores of Palestinians were also reportedly injured in the Israeli shelling.

The new fatality brings to 358 the number of Palestinians killed in the ongoing Israeli attacks on the Gaza Strip since July 7. At least 2650 Palestinians have also been injured.

Khalil al-Hayah had lost another son in an Israeli attack in the Gaza Strip in 2008.

Since July 7, Israeli army has been pounding the Gaza Strip with devastating air and naval attacks with the ostensible aim of halting rocket fire.

On Thursday night, Israel launched a ground assault into the Gaza Strip, sending thousands of troops to strike what it describe as "terrorist tunnels" in the Palestinian territory.