UNRWA running out of food, drugs for displaced Gazans 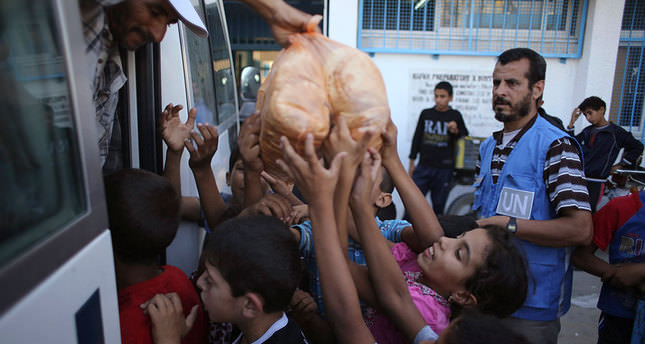 by AA
Jul 20, 2014 12:00 am
U.N. Palestinian refugees agency (UNRWA) warned Sunday it was running out of food and medicine for a growing number of displaced people in the Gaza Strip fleeing an ongoing Israeli shelling of residential areas in the Palestinian enclave.

According to UNRWA Gaza Director Robert Turner, all the UNRWA's supplies have run out and the agency is seeking help from the UN refugee agency (UNHCR) in Syria and Jordan.

Turner said that the UNRWA had turned six of its schools in the enclave into shelter centers to provide refuge for thousands of Palestinians who fled the Israeli incursion into their areas.

He noted that the UNRWA schools received 65,000 Palestinians until Saturday, expecting the figure to hit 85,000 on Sunday.

Dozens of Israeli tanks and military vehicles have forced their way into the eastern parts of Gaza City amid heavy artillery fire from the Israeli tanks in the area, prompting thousands of Palestinians to flee their homes towards the center of the city.

The incursion was coupled with heavy fighting between the Israeli troops and Palestinian resistance fighters, the witnesses added.

There is no specific toll yet for the fatalities, but Health Ministry spokesman Ashraf al-Qodra told Anadolu Agency that at least 13 Palestinians were killed and 200 others injured in Israeli shelling of residential areas, including al-Shujaya, in eastern Gaza City.

Since July 7, Israeli army has been pounding the Gaza Strip with devastating air and naval bombardment with the ostensible aim of halting rocket fire.

On Thursday, the Israeli army launched a ground assault into the Palestinian territory, sending thousands of troops into the blockades seaside enclave.