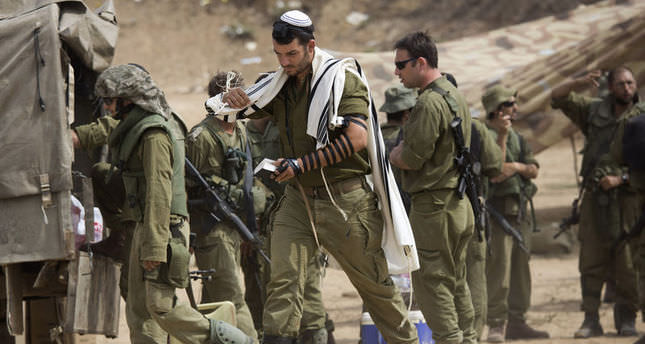 by AA Jul 21, 2014 12:00 am
At least 101 Israeli soldiers have been injured since the launch of ground operations in the blockaded Gaza Strip on Thursday night, Israeli state television reported Monday.

On Sunday, Israel admitted that 13 soldiers from its elite Golani Brigade had been killed in clashes with Palestinian resistance fighters in the besieged coastal territory.

Golani Brigade Commander Col. Raslan Alian was also seriously injured in the fighting in Gaza on Saturday, prompting his evacuation for medical treatment.

The latest fatalities bring the number of Israeli troops killed to 20 since Israel launched ground operations in the strip late Thursday.

Israeli authorities have only revealed the names of six of its soldiers killed in Gaza to date.

Since July 7, Israel has pounded the Gaza Strip, home to some 1.8 million Palestinians, with devastating air and naval bombardments with the ostensible aim of halting rocket fire by Gaza-based resistance factions.

At least 509 Palestinians have been killed and 3150 injured in ongoing Israeli attacks on the seaside enclave, which represents one of the most densely-populated areas on the planet.