Death toll in Gaza hits 509 after Israeli shelling of houses 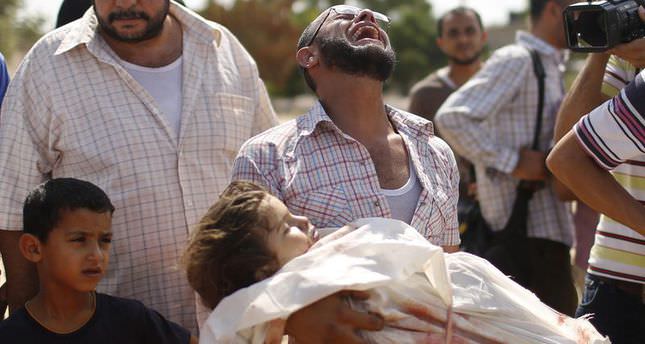 by AA Jul 21, 2014 12:00 am
The Palestinian death toll from Israel's ongoing offensive against the Gaza Strip has risen to 509 as the Israeli army launched fresh air and artillery attacks against several areas across the blockaded enclave in the early hours of Monday, a Palestinian medical official said.

According to al-Qodra, the targeted houses belonged to Siyam family, adding that charred body parts of several victims were recovered from the site while many of the injuries that arrived at the European Hospital included severed limbs.

Eyewitnesses said that the Israeli army fired over 13 artillery shells at six houses that belong to Siyam family, causing severe damage and leaving many casualties.

Elsewhere, the medical crews recovered nine bodies, including six children and a woman, from under the rubble of the house of Abu Jamei family in Khan Younis, southern Gaza Strip, after it was hit by Israeli artillery fire earlier in the day.

Another Palestinian was killed when an Israeli airstrike targeted a motor cycle in central Gaza Strip, al-Qodra said.

The fatalities came following a bloody day in the Gaza Strip where at least 110 people were killed in Israeli air and artillery attacks on Sunday, including 72 in the residential area of Shujaya in eastern Gaza City alone, making the day the deadliest since the Israeli operation began on July 7.

Over 400 Palestinians were also injured, many seriously, throughout the day.

Since July 7, Israel has been pounding the Gaza Strip with air and naval bombardments with the stated aim of halting rocket attacks from it.