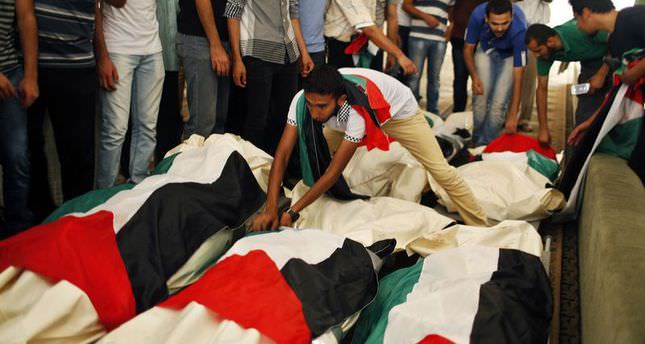 by AA Jul 21, 2014 12:00 am
The Palestinian Health Ministry said a staggering 119 people had been killed and 392 others injured in Israeli strikes throughout the Gaza Strip on Monday.

"These fatalities bring the number of people killed in Gaza since Israel started its current operation on July 7 to 570," Health Ministry spokesman Ashraf al-Qodra said.

"The casualties also raise the number of injured victims in Gaza since the beginning of the Israeli operation to 3400," he told Anadolu Agency.

He said 20 Palestinians were killed by Israeli strikes during the past few hours, including one on an apartment building just when Gaza's Muslims were breaking their fast.

He added that the strike on the apartment building left 11 people dead behind.

Since July 7, Israel has pounded the embattled coastal enclave with fierce air and naval bombardments with the stated aim of halting Palestinian rocket fire.

Sunday was the deadliest day yet of Israel's two-week onslaught, with at least 110 Palestinians – including 72 in eastern Gaza City's residential area of Shujaya – killed in devastating air and artillery attacks.