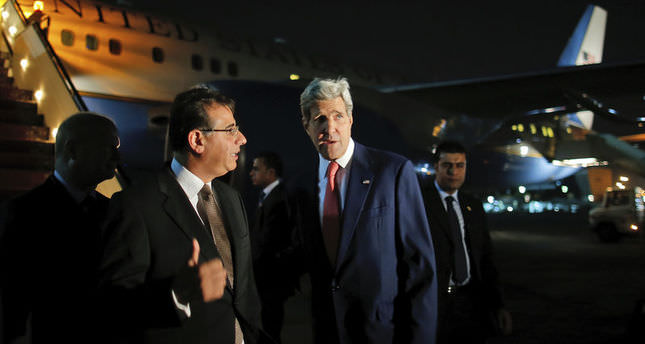 by Associated Press Jul 21, 2014 12:00 am
U.S. Secretary of State John Kerry left Washington early Monday for Cairo, where he will join diplomatic efforts to resume a truce that had been agreed to in November 2012. He was expected to urge Hamas to accept an Egyptian-offered cease-fire agreement.

Cairo's cease-fire plan is backed by the U.S. and Israel. But Hamas has rejected the Egyptian plan and is relying on governments in Qatar and Turkey for an alternative proposal. Qatar and Turkey have ties to the Muslim Brotherhood, which is also linked to Hamas but banned in Egypt.

Hamas remains deeply suspicious of the motives of the Egyptian government, which has banned the Muslim Brotherhood, a region-wide to which Hamas also belongs.

Meanwhile, cross-border fighting continued unabated, with Israeli strikes leaving entire families buried under rubble and Hamas fighters firing more than 50 rockets and trying to sneak into Israel through two tunnels, the latest in a series of such attempts.

Seven Israeli soldiers were killed Monday in clashes with Palestinian fighters, the Israeli military said. That raised the overall Israeli death toll to 27.

The Israeli military said four soldiers were killed in a firefight with Hamas trying to sneak into Israel through a tunnel, and that the other three were killed in battles in Gaza.

Palestinian health officials said at least 550 Palestinians have been killed and 3,350 wounded since the new round of fighting started on July 8.
Last Update: Jul 22, 2014 2:55 pm
RELATED TOPICS