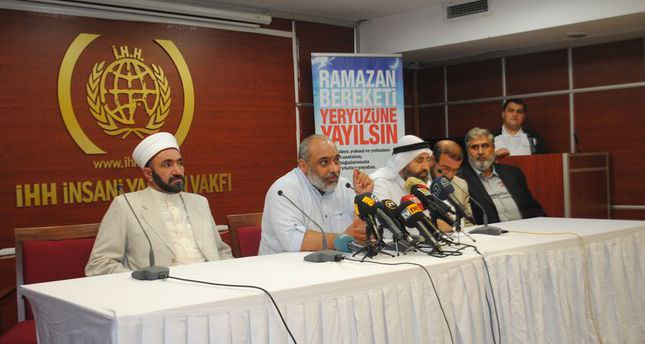 by AA Jul 21, 2014 12:00 am
Muslim intellectuals from Iraq, Palestine, Egypt and Turkey have jointly condemned Israel's aggression on Gaza Strip accusing Israel of being "primarily liable" for the massacre of at least 541 Palestinians and injuries of 3150.

"Unity brings triumph so I call upon all groups in Gaza to band together. The Gazan people should continue the resistence," said Dr. Nawaf Al Takruri, Secretary General of the Palestine Scholars Association reading out a joint declaration on behalf of Muslim scholars during a press conference at Istanbul headquarters of Turkish IHH Humanitarian Relief Foundation.

Takruri stated that the academics do not desire any deal with Israel, but said they will only accept one that will ensure the protection of all Gazan people's rights.

"The right to speak only pertains to the people of Gaza, the world should lend an ear to them," he added.

The secretary general demanded Egypt immediately re-open the border gates with Gaza, namely the Rafah border terminal. The Rafah terminal is the enclave's only window to the outside world that is not under Israeli control but remains closed by the Egyptian junta since last summer's ouster of President Mohamed Morsi.

"We want the injured to be evacuated and receive treatment and medication in Egypt," he said.

The academics also called upon all Muslims and "conscious-bearers" to raise their voices against the "atrocity," and to stage protests.

"It is forbidden by religion to remain silent in the face of such murders. As Prophet Mohammed puts it, it means being a 'mute devil.' Our share is to speak the truth to prompt the related authorities and remove Al-Aqsa Mosque from Zionist oppression," said Abdulvahap Ekinci, Head of Turkish Union of Ahly Sunnah Scholars.

The Former chairman of the International Union of Muslim Scholars, Prof. Dr. Ahmet Agirakca said "the fight for Gaza will continue until the liberation of Al-Quds (arabic for Jerusalem) - the first kiblah (praying direction) of Muslims."

"As scholars, we must put pressure on world leaders. This massacre should be clearly told and laid bare before the world's public eye. They (Israel) have gone too far by killing women and children. Allah will bring us all to account for our silence," said Union of Iraqi Scholars representative Dr. Hussein Semirai.

"We can win only if we join our forces. The Gazan resistance against Israel - even in these circumstances - will be able to stop the Israeli forces. Israel will step back," stated Atia Adlan, representative of Muslim Thinkers Platform.

He urged the Arab League to take a political stance against the Israeli military operations and called on Arab countries to cut off relations with Israel.

Dr. Yahya Tai, member of Union of Iraqi Scholars, called for a boycott against the products of Israel and the countries supporting the Jewish state.

"Israel must cease these assaults if it does not want the war to expand," IHH President Bulent Yildirim said.

Sunday saw the deadliest day yet in the two-week-long onslaught with at least 110 Palestinians-including 72 in Shujaya, a residential area of eastern Gaza City-killed by devastating Israeli air and artillery attacks.