No safe place for civilians in Gaza U.N. says 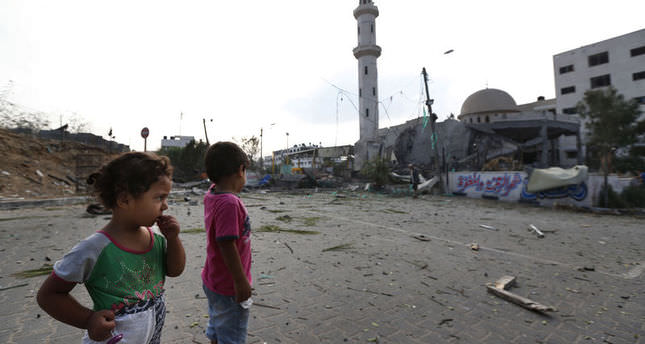 by Jul 22, 2014 12:00 am
Palestinian civilians in densely populated Gaza have no place to hide from Israel's military offensive and children are paying the heaviest price, the United Nations said Tuesday.

"There is literally no safe place for civilians," Jens Laerke, spokesman of the U.N. Office for the Coordination of Humanitarian Affairs, told a news briefing in Geneva on the conflict that has claimed more than 600 lives.

Israel has claimed it warns civilians about areas that it intends to strike by dropping leaflets and firing missiles that carry little or no explosive payload.

The death toll is rising in Gaza, which has an estimated 4,500 people per square kilometer, he said, adding that the priority for aid agencies was protecting civilians and evacuating and treating the wounded.

Nearly 500 homes have been destroyed by Israeli airstrikes and 100,000 people have sought shelter in schools of the U.N. Relief and Works Agency, where they need food, water and mattresses, he said.

"This number continues to increase by the hour," UNRWA said in a statement Tuesday, almost doubling its emergency funding appeal from $60 million to $115 million.

Israel began airstrikes on the coastal strip on July 8, saying it wanted to halt missile fire out of Gaza by Hamas militants, and launched a ground offensive last Thursday.

"The ongoing ground incursion, begun on July 18, has greatly accelerated the casualty rate over the past two days, as well as the numbers of displaced families," the World Health Organization said in a statement.

Twenty-nine Israelis, 27 of them soldiers, have died.

But the overwhelming majority of people killed so far in the conflict are Palestinians, including 121 Gazan children under the age of 18, Juliette Touma of the U.N. Children's Fund (UNICEF) said.

More than 900 Palestinian children are also reported to have been injured, according to UNICEF.

"According to an assessment by aid workers on ground, at least 107,000 children need psycho-social support for the trauma they are experiencing such as death, injury or loss of their homes," Laerke said.

More than 1.2 million of the 1.8 million people in Gaza have no water or only limited access to water as power networks have been damaged or lack fuel for generators, he said.

"In addition, we do have reports of sewage flooding, which is a threat to public health," Laerke said.

"Ready-to-eat food stocks are running low in Gaza," she said.

Food will be bought locally and also airlifted from Dubai.

The World Health Organization said that 18 health facilities in Gaza have now been damaged, including three hospitals. An Israeli tank shell hit the third floor of Al-Aqsa hospital in the central Gaza Strip Monday, killing four people and wounding 16, the Health Ministry said.

"All patients were evacuated and the 100-bed hospital is no longer functioning," a WHO statement said Tuesday after a team from the organization visited the site.

Hospitals in northern Gaza have been overwhelmed by high numbers of trauma patients and inadequate supplies, it said.

The International Committee of the Red Cross, guardian of the rules of war, condemned the attack on the Al-Aqsa hospital, which it said came under "direct fire at least four times."