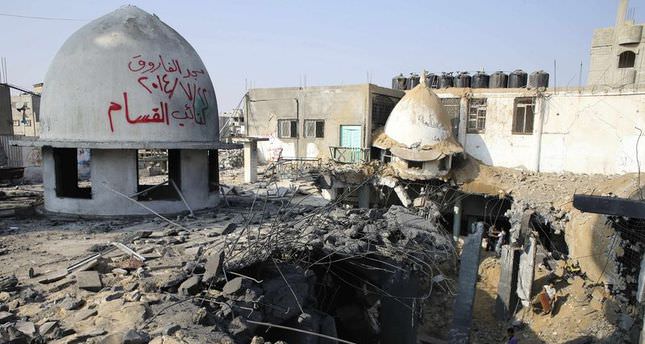 by AA Jul 23, 2014 12:00 am
At least 12 Palestinians have been killed in Israeli artillery shelling of eastern Khan Younis city in southern Gaza Strip on Wednesday, a Health Ministry official said.

He expected the death toll to rise.

Al-Qodra said that Israeli forces were preventing medics and Red Cross volunteers from reaching the bombed areas to evacuate the victims.

Earlier in the day, eyewitnesses said that scores of Palestinians had been killed and injured in a fierce Israeli shelling of residential areas in Khuzaa and Abasan in Khan Younis.

According to eyewitnesses, the Israeli tanks and artillery fired dozens of shells at the two towns while Israeli military aircraft flied overhead.

"Bodies have been scattered on Khuzaa's streets due to the indiscriminate artillery shelling as the Israeli army is preventing ambulances and civil defense teams from getting into the town," he added.

Since July 7, Israel has pounded the Gaza Strip with fierce aerial and naval bombardments. On Thursday night, Israel stepped up its offensive to include ground operations, sending thousands of troops into the embattled Palestinian territory.

At least 650 Palestinians have been killed and more than 4000 injured in the ongoing Israeli attacks, now in the third week.

According to official Israeli figures, 29 Israeli soldiers and two civilians have been killed since the hostilities began.

Israel's military operation is the self-proclaimed Jewish state's third major offensive against the densely-populate Gaza Strip-which is home to some 1.8 million Palestinians-within the last six years.