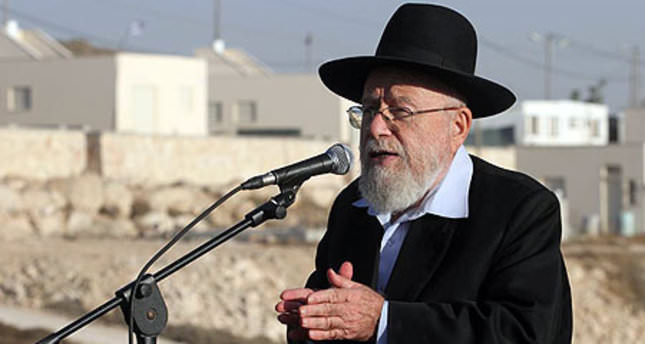 by Daily Sabah Jul 23, 2014 12:00 am
An Israeli Rabbi by the name of Dov Lior has recently issued an outrageous ruling which allows the indiscriminate killing of innocent Palestinian civilians including children by the Israeli forces.

The rabbi who resides in the illegal settlement of Kiryat Arba in the occupied West Bank authorizes indiscriminate killings as his ruling suggests that the Israeli forces are not obliged to check to see if their targets are civilians or not. More importantly, it encompasses all measures seen as "necessary" by Israelis to attack their targets including denying necessary humanitarian supplies or electricity. "In the case of Gaza," the rabbi said, the Israeli military officials "will be allowed to instruct even the destruction of Gaza." The rabbi justified his radical statements by claiming that Israel is at war with the people of besieged Gaza.

At least 647 Palestinians, mostly women and children, have been killed in the past two weeks and more than 4,000 others injured in Israel's attacks while the infrastructure in Gaza is devastated with hospitals and schools constantly being a target of the attacks.