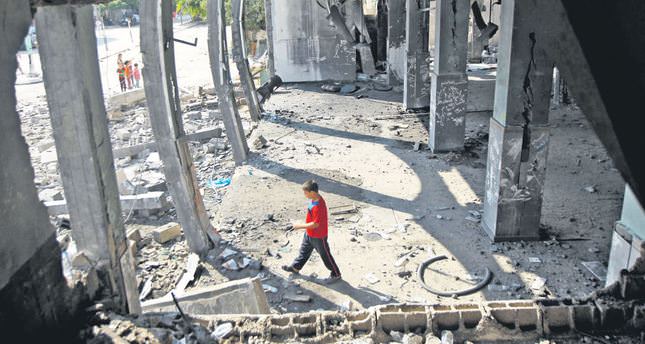 by Yusuf Selman İnanç Jul 23, 2014 12:00 am
Many international and regional actors in pursuit of a ceasefire in Gaza, which has been under Israeli attack for the last two weeks, have focused on the ceasefire proposal made by Egypt. Although the war has become bloodier by the day, Hamas insists on rejecting Egypt's ceasefire proposal, claiming that the proposal does not meet its demands and conditions. Yet it is claimed that the proposal is almost identical to the previous one which was accepted by Hamas in the era of Egypt's first democratically elected President Mohammed Morsi, who was overthrown after a military coup last year by the recently elected president and former defense minister Abd al-Fattah el-Sissi. While pushing Hamas to accept it, the U.S., EU and Israel say Egypt's proposal is the only way for a permanent ceasefire. Hamas officials said that Egypt and Israel have not even sent the text but gave little further information.

Mahmoud Abbas, the president of Palestinian Authority, the Arab League, Israel, the EU and U.S. accepted the proposal. Yet, Hamas is persistently refusing it. While the largely civilian death toll in Gaza has soared above 600 and the loss of 25 soldiers shows that Israel is more aggressive than normal, Hamas' stance raises the question of what the real motivation would be behind the refusal of the ceasefire proposal.

Sissi, who overthrew the Morsi government through a military coup which left thousands dead and imprisoned, plays the mediator role in the ceasefire talks. Sissi, who added the Muslim Brotherhood to the list of terrorist organizations, is a sworn enemy of the Islamist movements in the region. He has attempted to not only end the Muslim Brotherhood's presence but also existence in Egypt through judging thousands of members and sentencing hundreds of them to death. After the military coup, carried out on 3 July 2013, Hamas' officials were disappointed and scared that the coup would bring the end of their administration in the Gaza strip, according to a local source. Hamas avoided pledging support to ousted president Morsi explicitly and had a more balanced policy toward the new Egyptian rule. Immediately after the coup, the Salafis in Gaza started organizing demonstrations against Hamas as the Salafi groups in Egypt supported Sissi. Hamas had to limit bilateral relations with Iran and Hezbollah who have been constant supporters, as Shiite Iran and Hezbollah sided with Bashar Assad, who is responsible for the war crimes in Syria.

Hamas lost its three supporters, Iran, Hezbollah and Muslim Brotherhood's Morsi. In the region, Turkey and Qatar have remained as the only supporters of Hamas whose relations with Egypt have deteriorated after the coup as Turkey strictly sided with Morsi and Egypt jailed Doha-based Al Jazeera journalists. Therefore Hamas is not enjoying its best days and a chance has appeared for Sissi to restore his image.

İsmail Numan Telci, a researcher at the Center for Middle Eastern Studies at Sakarya University specializing in Egypt said that "prior to the military coup in Egypt there were threats against Israel posed by Sinai and Gaza. Now, the threats are less than before. When we remember the Israeli airstrikes on Gaza in 2012, ousted President Mohammed Morsi simply stopped the war and convinced the two sides to sign the ceasefire proposal. Yet, with the ceasefire proposal, Sissi, who is supporting Israel, explicitly aims to consolidate Israeli support for its government and legitimize its military coup in the international and regional political arena. Despite efforts, Sissi will not be able to gain legitimacy in the eyes of Arab people and be successful in the mediating role as obviously he supports one side, Israel."

As a response to the question of why Hamas rejected the ceasefire proposal, the co-founder of the online news publication The Electronic Intifada, and author of the new book "The Battle for Justice in Palestine," Ali Abunimah told Daily Sabah, "the Egyptian declaration was a fate accompli designed to rescue Israel from a disastrous adventure. The goal was to return to the status quo in which 1.8 million Palestinians in Gaza are subjected to a cruel and life-destroying siege. The rejection was not just from Hamas alone but from all resistance factions and from the population itself. The sentiment I was hearing from Gaza was this: 'we did not waste all this blood to go back to living in a giant prison. The siege must end."

Telci also responded to the same question and said "Egypt has not opened the Rafah crossing point while hundreds of people were being killed. The head of Egyptian Intelligence Service Mohammad al-Tuhami visited Tel Aviv to share information just before the operation. Hamas' rejection should be considered normal due to Egypt's stance. The cease-fire proposal also suggests demilitarization of Hamas but Hamas very-well knows how brutal Israel can be against innocent and unarmed people. Yet, it does not mean Hamas does not want ceasefire at all. It had proposed a ten-year long ceasefire which was rejected by Israel."

Touching on the future of Hamas-Egyptian relations he stated that "As long as Sissi remains in power, the relationship will continue to deteriorate. Due to the close ties between the Muslim Brotherhood and Hamas, Egypt conducts hostile policies toward Hamas. Because the Sissi government seeks the support of Tel-Aviv, Cairo's policies against Hamas should be in line with that of Tel-Aviv. Therefore under current circumstances relations will not probably get any better."

In 2012, on Israeli agression towards Gaza, Morsi said "We see what is happening in Gaza, the aggression and killing of men, women and children. Blood is being spilled. We, together with Egypt and its great people and its enormous resources and its proud men and its women who are capable of giving; Egypt, the Arabs and the Muslims, I say, while having full confidence in all of these, they will not leave Gaza alone. Today, we are facing this aggression, we say to the aggressor, 'you will not accomplish peace through aggression nor will you have stability through aggression and you will earn no good on this land through aggression.' "

Sissi, with whom Hamas does not want to cooperate, keeps his silence over the increasing civilian death toll.
Last Update: Jul 23, 2014 2:30 am
RELATED TOPICS