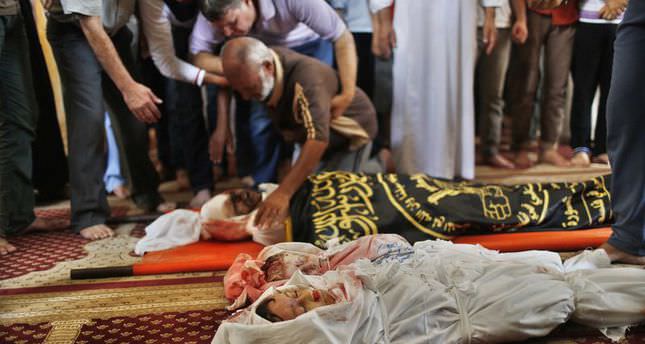 by AA Jul 24, 2014 12:00 am
At least nine Palestinians were killed on Thursday in fresh Israeli airstrikes on the Gaza Strip, raising the Palestinian death toll from Israel's devastating military offensive to 797, a Palestinian Health Ministry spokesman has said.

"Five Palestinians were killed in an Israeli airstrike on Khan Younis, southern Gaza Strip, and four others, including a two-year-old child, were killed in another raid that targeted a land near a children hospital in eastern Gaza City," ministry spokesman Ashraf al-Qodra told Anadolu Agency.

The fatalities rose to 116 the number of Palestinians killed in the Israeli offensive on Thursday alone, he said.

"At least 797 people have been killed and around 5130 injured in ongoing Israeli attacks on the Gaza Strip," al-Qodra said.

He noted that the fatalities included 190 children, 95 women and 47 elderly people.

Earlier in the day, more than 15 Palestinian civilians were killed when the Israeli army shelled a school run by the U.N.'s Palestinian refugees agency (UNRWA) in the northern Gaza Strip.

Dozens of other fatalities were reported in the town of Khuza'a in the southern city of Khan Younis, which has remained under fierce Israeli bombardment since Wednesday.

Israel has stepped up its onslaught on eastern Khan Younis since Wednesday, leaving an unknown number of dead and injured under the rubble, according to medics at the scene.

Since July 7, Israel has pummeled the Gaza Strip – from air, land and sea – with the ostensible aim of halting Palestinian rocket fire.

According to official Israeli figures, 34 Israelis –32 soldiers and two civilians – have been killed since hostilities began.

In 2008/9, over 1500 Palestinians were killed – the vast majority of them civilians – during Israel's three-week-long "Operation Cast Lead."