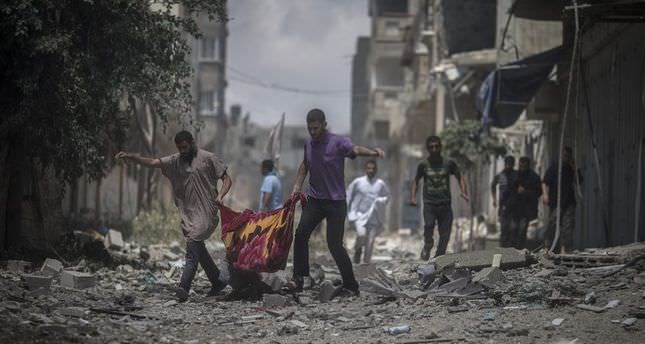 Since July 7, Israel has pummeled the Gaza Strip – from air, land and sea – with the ostensible aim of halting Palestinian rocket fire.

Five Palestinians were killed in the Gaza Strip on Friday by fresh Israeli airstrikes, bringing the Palestinian death toll from Israel's devastating 19-day onslaught on the coastal enclave to 828.

Al-Qodra also said that a five-year-old child had been shot dead by Israeli snipers in the eastern Gaza Strip's embattled Al-Shujaya district.

The spokesman added that at least 29 Palestinians had so far been killed on Friday in fierce Israeli attacks across the Gaza Strip.

The latest fatalities bring to 828 the total number of Palestinians killed by Israel's onslaught on the besieged coastal territory, which began on July 7.

At least 5300 Gazans have also been injured, meanwhile, most of them critically.

Since July 7, Israel has pummeled the Gaza Strip-from air, land and sea-with the ostensible aim of halting Palestinian rocket fire.

In 2008/09, over 1500 Gazans were killed-the vast majority of them civilians-during Israel's three-week-long "Operation Cast Lead."