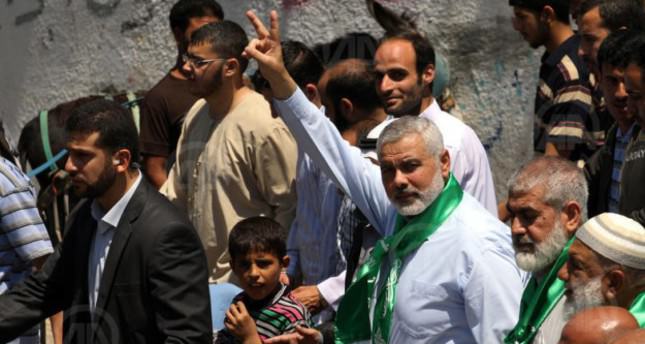 by AA Jul 25, 2014 12:00 am
Palestinian resistance faction Hamas is considering a proposal on a seven-day humanitarian ceasefire with Israel, a senior member of the group said Friday.

"The proposal is being studied by the movement," Hamas leader Ezzat al-Rashq tweeted.

Earlier in the day, the Israeli security cabinet has rejected a proposal by U.S. Secretary of State John Kerry for a ceasefire in the Gaza Strip.

A government source was quoted by The Jerusalem Post as saying that Israel wanted "modifications" to the proposal before it agreed to halt hostilities.

Israeli daily Haaretz quoted an unnamed Israeli official as saying that Kerry's plan called for a one-week ceasefire starting Sunday, during which some Israeli troops would remain in the Gaza Strip.

The proposal, according to the report, also calls for the U.S., the E.U. and the U.N. secretary-general to provide guarantees to both sides that subsequent negotiations would deal with longstanding grievances, including the disarming of Gaza-based resistance factions and an end to Israel's years-long blockade on the Gaza Strip.

Haaretz added that Kerry was currently awaiting a response from the Turkish and Qatari foreign ministers on Hamas' stance on the new proposal.

The move comes after Hamas rejected an earlier ceasefire proposal by Cairo, saying it had never been consulted on the terms of the plan.

Cairo unveiled its ceasefire initiative last week amid a fierce Israeli military offensive against the Gaza Strip, which has continued unabated since July 7.

Israel's onslaught has left at least 864 Palestinians dead – mostly civilians – and over 5400 injured, according to official figures.

Over the same period, 35 Israeli soldiers have been killed in fierce clashes with Palestinian resistance fighters.

Since hostilities began almost three weeks ago, only three Israeli civilians have reportedly been killed by rocket fire from Gaza.

Israel's "Operation Protective Edge" is the self-proclaimed Jewish state's third major offensive against the densely-populated Gaza Strip, which is home to some 1.8 million Palestinians, within the last six years.

In 2008/09, over 1500 Palestinians – the vast majority of them civilians – were killed in Israel's three-week-long "Operation Cast Lead."