Young Palestinians prevented from praying at Al-Aqsa by Israel 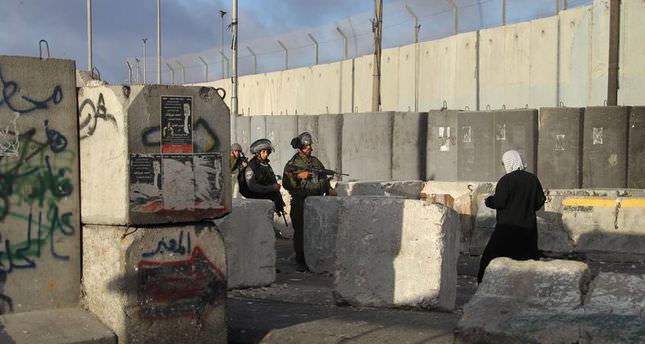 by AA Jul 25, 2014 12:00 am
Thousands of young Palestinians took to the streets outside Jerusalem's Old City for the last Friday prayers of the Muslim fasting month of Ramadan after Israel barred them from entering the city's Al-Aqsa Mosque complex, a Palestinian official has said.

"Today, only 30,000 Palestinians were able to perform Friday prayers inside Al-Aqsa, compared to 400,000 on the last Friday of Ramadan last year," an official at Jerusalem's Endowment Authority, requesting anonymity, told Anadolu Agency.

"The mosque's courtyard was practically empty of worshippers," he said.

Israeli police spokesman Micky Rosenfeld had said on Twitter earlier that all Muslim worshippers under 50 years old would be barred from entering the Al-Aqsa mosque complex.

Israel stepped up security around the mosque complex's perimeter on Friday, prompting thousands of Palestinian worshippers to perform prayers outside the Old City's gates, according to eyewitnesses.

Witnesses also reported clashes near the city gates after Palestinian youths hurled rocks at Israeli forces, who responded with barrages of teargas and sound bombs.

Two Palestinians were arrested during the clashes, eyewitnesses said.

Israel occupied East Jerusalem during the 1967 Middle East War. It later annexed the holy city in 1980-in a move never recognized by the international community-claiming it as the capital of the self-proclaimed Jewish state.

Tension continues to run high in the occupied West Bank amid an ongoing Israeli onslaught on the blockaded Gaza Strip, which has killed at least 828 Palestinians-mostly civilians-and injured over 5300 since it began on July 7.

According to official Israeli figures, 35 Israelis-33 soldiers and two civilians-have been killed since hostilities began.