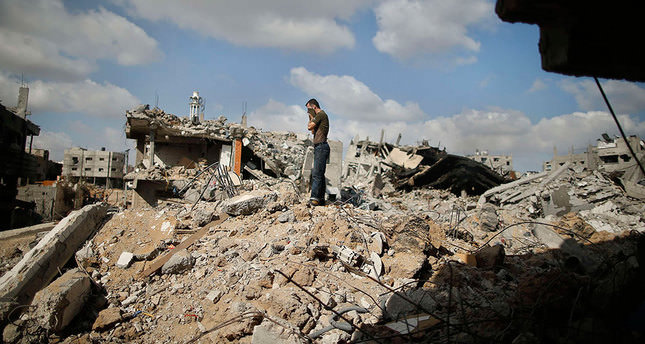 by AA Jul 26, 2014 12:00 am
Rescue workers on Saturday pulled the bodies of 146 people from the rubble of homes in border areas in the Gaza Strip, ones that were devastated by Israel's shelling and aerial strikes over the past days.
The recovered bodies include children and women, according to Palestinian Health Ministry spokesman Ashraf al-Qodra.
He said with the new recovered bodies counted, Gaza's death toll rises to 1046 since Israel launched its current war on the Palestinian enclave on July 7.
"Around 5900 Gazans were also injured since the beginning of the war," al-Qodra told Anadolu Agency.
A humanitarian ceasefire came to an end in the Gaza Strip a short time ago after 12 hours of calm. The ceasefire, proposed by United Nations Secretary-General Ban Ki-moon earlier, aimed to give Gaza's residents the chance to buy their needs and hospitals to receive new medical supplies.
Al-Qodra said the aforementioned toll can rise in the next few hours as rescue teams still search for more victims under the rubble in the border areas.
Eyewitnesses, meanwhile, said some bodies are still trapped under the debris of destroyed homes in the eastern suburbs of the southern Gaza Strip city of Khan Yunis.
The humanitarian lull came hard on the heels of intensive Israeli shelling of homes and sites in the Gaza Strip, shelling that started on July 7.
Gaza-based resistance factions, meanwhile, fired rocket at Israeli cities in response to relentless Israeli bombardments.
Israel's military operation, dubbed operation "Protective Edge," is the self-proclaimed Jewish state's third major offensive against the densely-populate Gaza Strip – which is home to some 1.8 million Palestinians – within the last six years.