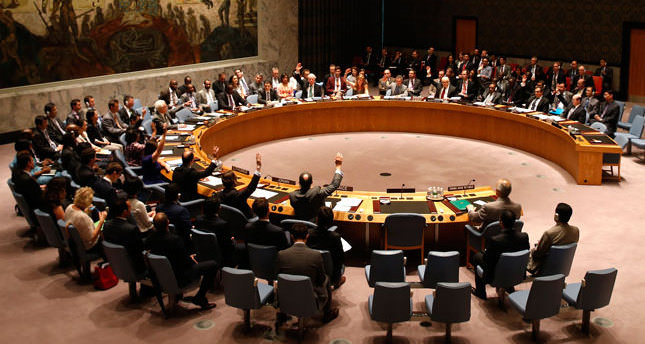 by Associated Press Jul 26, 2014 12:00 am
Nine trucks carrying food and other supplies crossed into Syria through a Turkish checkpoint Thursday the first to do so under a U.N. resolution authorizing cross-border aid deliveries without Syrian government approval.

Amanda Pitt, spokeswoman for the U.N. Office for the Coordination of Humanitarian Affairs, said the trucks contained desperately needed food, water purification tablets, and sanitation and shelter materials. The convoy went through the Bab al-Salam crossing toward rebel-held areas but its destination was not known, she said. "It is, I believe, the first convoy going into Syria through one of the four border crossings under the U.N. Security Council resolution," Pitt said.

The council unanimously approved a resolution on July 14 authorizing crossborder delivery of aid to Syrians in rebelheld areas without government approval through four crossings two in Turkey, one in Jordan and one in Iraq.

The U.N. humanitarian office has said that if security allows, aid could reach 2.9 million people through the four crossings.

The announcement of the first crossing coincided with U.N. Secretary-General Ban Ki-moon's monthly report to the Security Council on the worsening humanitarian situation in the threeyear- old Syrian conflict, which has killed more than 150,000 people. "Approximately 10.8 million people need humanitarian assistance in Syria, including 4.7 million in hard-to-reach areas and at least 241,000 living in areas," he said. "This is compounding the already dire water, sanitation and health conditions in conflict areas and resulting in an increased risk of outbreaks of waterborne diseases," Ban said.

The U.N. chief said new truck-sealing procedures ordered by the government reduced the delivery of aid in May and June. Ban said getting aid to people in hardto- reach areas also remains "extremely difficult" in view of new procedures which have centralized government approvals.

He accused the government of continuing to prevent injectable medicines and surgical equipment from getting to these areas "in flagrant violation of international humanitarian law."

The U.N. chief urged all parties to comply with the July 14 Security Council resolution and a previous resolution in February demanding that all sides allow immediate access for aid and lift sieges of populated areas. It also called for an end to the deprivation of food to civilians, a halt to attacks against civilians.
RELATED TOPICS