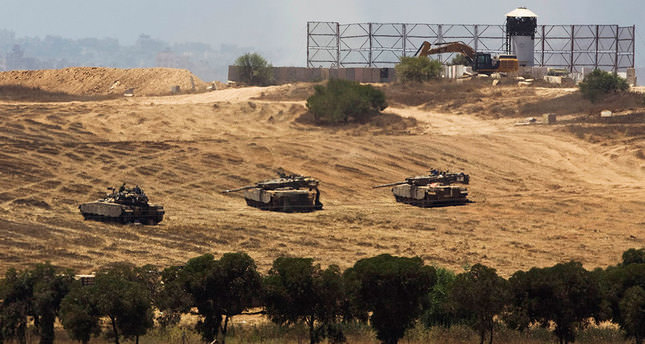 by AA Jul 26, 2014 12:00 am
A few hours into a temporary "humanitarian truce" between Israel and Palestinian factions in the Gaza Strip, Israeli forces continued on Saturday to destroy underground tunnels and restrict access to areas near the Gaza-Israel border, a Palestinian official said.

"Our paramedics and rescue crews could not reach these areas to extract bodies or treat the wounded," al-Saudi said.

Palestinian resistance factions and Israel on Saturday began a 12-hour humanitarian ceasefire in the Gaza Strip, which has been reeling under a devastating Israeli military offensive since July 7.

The Israeli army confirmed the pause, warning it will respond for any attack on its forces or rocket fire at Israeli cities.

The army, however, warned displaced Palestinians against returning to their homes

The short lull was proposed in Cairo on Friday during a joint press conference between United Nations Chief Ban Ki-moon, Egyptian Foreign Minister Sameh Shoukri and his U.S. counterpart John Kerry, after the latter failed to reach a week-long humanitarian pause in Israel's 20-day military offensive in the beleaguered Gaza Strip.

"Despite the truce, Israeli forces have warned displaced families against returning to their homes," al-Saudi asserted.

He also complained of Israeli restrictions on the access of medics to the border areas to evacuate the injured.

"Only six ambulance vehicles were allowed into some eastern areas after the Red Cross organization contacted Israeli authorities to allow civil defense teams to perform their duties in these areas," he said.

At least 900 Palestinians have been killed and more than 6000 others injured in Israeli attacks across the blockaded territory, according to the Palestinian Health Ministry's latest reports.

Thus far, no violation of the truce has been reported by either party.

Israeli army, however, said that it will continue to "locate and neutralize" underground tunnels.

"Sounds of loud explosions could be heard from the eastern border areas from Israeli bombing of tunnels," al-Saud said.

Earlier on Saturday, Israel's Channel One broadcast images of a sizeable explosion of one Gaza tunnel near the border.

According to official Israeli figures, 40 Israelis-37 soldiers and three civilians-have been killed since hostilities began.

In 2008/9, over 1500 Palestinians were killed-the vast majority of them civilians-during Israel's three-week-long "Operation Cast Lead."