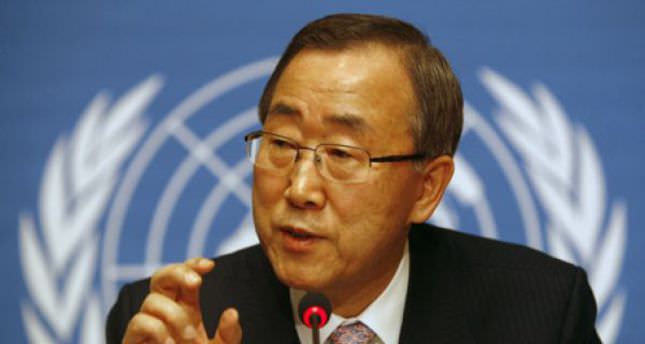 by AA
Jul 26, 2014 12:00 am
The UN Secretary-General Ban Ki-moon appealed to all parties to declare a seven-day humanitarian ceasefire in Gaza, his office said in a statement Saturday.
"[The Secretary-General] urgently appeals once again to all parties to declare a seven-day humanitarian ceasefire in Gaza as a prelude to renewing a political process as the only way of achieving a durable peace," read the statement.
As the humanitarian pause in Gaza nears end, Ban welcomed "the broadly observed 12-hour ceasefire" amid horrifying scenes of Palestinian civilians' continuous suffering, the statement said.
"There are countless images of Gazans trying to return to their daily lives while taking care of their wounded and attending to their dead," Ban was quoted as saying in the statement.
He also reiterated the importance of addressing the root causes of the conflict between Israelis and Palestinians.
"It will do little more than set the stage for the next cycle of violence" if these causes are not addressed," Ban said, adding: "The blockade of and the closure on Gaza must end."
The Palestinian death toll from Israel's devastating military action in the Gaza Strip had risen to 1046, the Palestinian Health Ministry said on Saturday.
A humanitarian ceasefire came to an end in the Gaza Strip a short time ago after 12 hours of calm. The ceasefire, proposed by United Nations Secretary-General Ban Ki-moon earlier, aimed to give Gaza's residents the chance to buy their needs and hospitals to receive new medical supplies.
The humanitarian lull came hard on the heels of intensive Israeli shelling of homes and sites in the Gaza Strip since July 7.
Meanwhile, U.S. media reported on Saturday that skepticism and reticence still prevail regardless of the positive attitudes of politicians and those who tried to broker ceasefire in previous couple of days.
The new round of possible fighting between Israel and Hamas as a further escalation after Secretary of State John Kerry and Ban Ki-moon failed Friday to broker a truce that would last for a week has also been widely reported.
Last Update: Jul 26, 2014 11:48 pm