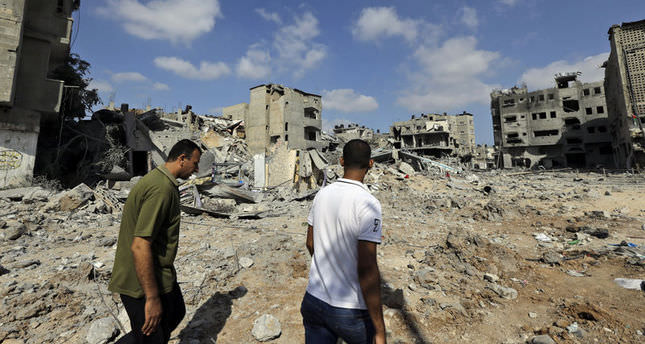 by AA Jul 27, 2014 12:00 am
The Palestinian resistance factions have accepted a U.N. request for a 24-hour humanitarian truce in the embattled Gaza Strip, Hamas said Sunday.

"In response to the intervention of the United Nations, and considering the public circumstances and Eid al-Fitr holiday, the resistance groups have agreed to a 24-hour humanitarian truce starting 2pm local time [11am GMT] on Sunday," Hamas spokesman Sami Abu Zuhri said in a statement.

The Israeli army is yet to comment on the announcement.

The announcement came shortly after the Ezzeddin al-Qassam Brigades, the armed wing of Hamas, said that it had fired several rockets into Israel following the expiry of an earlier temporary truce observed Saturday.

Hamas and other Palestinian groups have already announced opposition to any calm agreement that does not entail the withdrawal of Israeli forces from the besieged Gaza and allowing displaced Gazans to return to their homes.

At least 1060 Palestinians, mostly civilians, have been killed since July 7 in what Israel describes as a military operation aimed at halting rocket fire from Gaza.

The offensive, dubbed operation "Protective Edge," is Israel's third major offensive against the densely-populate Gaza Strip-which is home to some 1.8 million Palestinians-within the last six years.