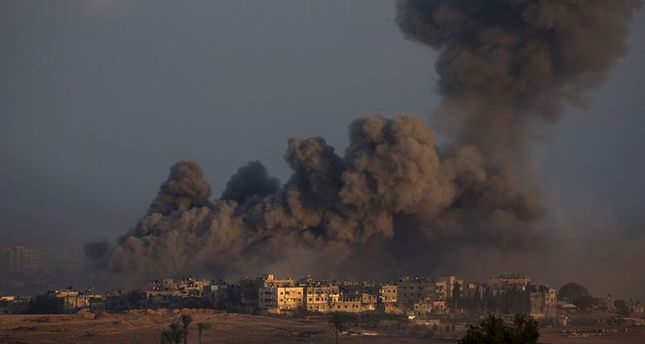 by AA Jul 27, 2014 12:00 am
The Israeli army on Sunday said it resumed its military offensive against the Gaza Strip, citing Palestinian resistance group Hamas' "incessant" rocket fire at Israel.

"Due to Hamas' incessant rocket fire during the humanitarian window, we are renewing our aerial, naval and ground activity in Gaza," the army said on its official Twitter account.

The announcement came shortly after the Ezzeddin al-Qassam Brigades, the armed wing of Gaza-based Palestinian faction Hamas, said that it fired several rockets at Israel.

In a statement, the brigades said it fired two M75 rockets at Tel Aviv and five Grad rockets at Ashdod.

The Gaza-based Hamas said late on Saturday that it did not approve an extension of an 12-hour humanitarian ceasefire in the Gaza Strip, which came to an end on Saturday evening in the Palestinian enclave.

Following the expiry of the temporary truce, the brigades said that it fired 24 rockets on different Israeli cities and sites.

Gaza's 12-hour U.N.-proposed humanitarian lull came to an end at 17:00 GMT, but the Israeli government said it was expanding this calm by four more hours so that it can come to an end at midnight.

The humanitarian lull came hard on the heels of a crippling Israeli onslaught against the blockaded Gaza Strip, which started on July 7.

At least 1049 Palestinians have been killed-mostly civilians-and around 6000 others injured in Israel's offensive.