No Eid celebration for Palestinians as fatalities hit 1053 in Gaza 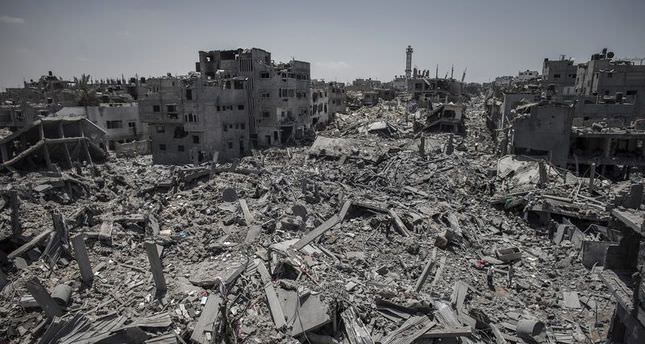 by AA Jul 27, 2014 12:00 am
There will be no celebrating Eid, the Muslim national holiday, in Gaza as four Palestinians were killed Sunday in fresh attacks as the Israeli army resumed its military offensive against the blockaded Palestinian enclave after a 12 hour humanitarian ceasefire.

The latest fatalities bring to 1053 the number of Palestinians killed in Israeli attacks on the Gaza Strip since July 7. At least 6000 Palestinians have also been injured.

"Due to Hamas' incessant rocket fire during the humanitarian window, we are renewing our aerial, naval and ground activity in Gaza," the army said on its official Twitter account.

The announcement came shortly after the Ezzeddin al-Qassam Brigades, the armed wing of Gaza-based Palestinian faction Hamas, said that it fired several rockets at Israel.

In a statement, the brigades said it fired two M75 rockets at Tel Aviv and five Grad rockets at Ashdod.

Late on Saturday, Hamas said that it did not approve an extension of a 12-hour humanitarian ceasefire in the Gaza Strip, which came to an end on Saturday evening in the Palestinian enclave.
"There is no agreement on extending the ceasefire in Gaza by four hours," Hamas spokesman Sami Abu Zuhri said in a statement.