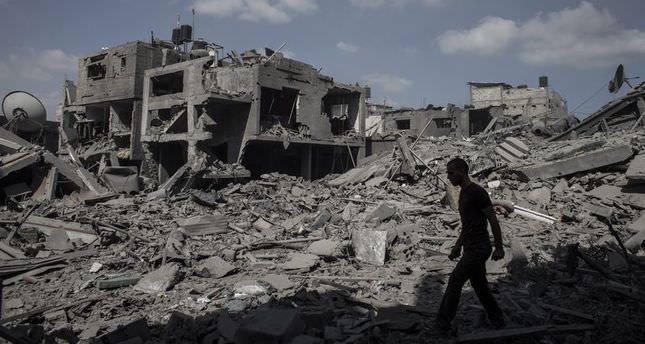 by AA Jul 27, 2014 12:00 am
A Gazan wounded during Israel's offensive against the Gaza Strip has been brought to Istanbul for treatment from Egypt, the president of the Turkish Cooperation and Coordination Agency (TİKA) has said.

Serdar Çam said that Abdulrauf Gazi Mohammed was flown to a public hospital near the Turkish city's Atatürk Airport early on Sunday, suffering injuries to his legs, arms and face.

Çam said: "About 60 wounded Gazans were discharged from an Egyptian hospital, but have had difficulties in leaving the country.

"Turkey is planning to bring more injured Gazans to Istanbul."

Mohammed had been receiving treatment in the Egyptian port city of Al Arish before he was brought to Turkey for further treatment.

The Israeli military announced on Sunday that its military onslaught on Gaza would continue following a 12-hour ceasefire between it and Palestinian factions a day earlier, after Hamas rejected Israeli terms for a 24-hour truce as they did not contain a withdrawal of Israeli forces from the embattled enclave.

More than 1,000 Palestinians have been killed and 6,000 injured in the Israeli assault, which began on July 7.

At least 46 Israelis-43 soldiers and three civilians-have also been killed since hostilities began.