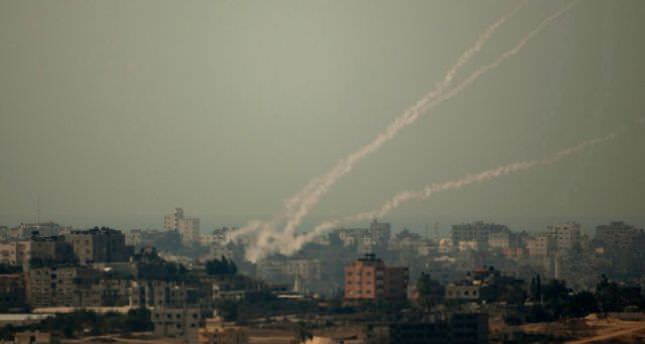 by AA Jul 28, 2014 12:00 am
GAZA CITY—Four people were killed on Monday when a mortar fell on the local council headquarters of the southern Israeli city of Ashkol, an Israeli military official said.
The official was quoted by the radio of the Israeli army as adding that the mortar was fired from the Gaza Strip.
He did not, however, provide any further details about the incident.
Israel's police said a short time earlier on its Twitter account that a rocket had fallen on Ashkol, leaving some Israelis injured.
The Israeli daily Haaretz, meanwhile, reported that eight Israelis at least were injured in the rocket attack, describing the condition of one of the victims as "critical".
Israeli Police Spokesman, Micky Rosenfeld, said that warning sirens were sounded in the nearby Ashdod and Ashkelon cities.
Since July 7, Israel has pounded the Gaza Strip with fierce aerial bombardments with the ostensible aim of halting rocket fire.
At least 1055 Palestinians have been killed-mostly civilians-and more than 6245 others injured in Israel's ongoing offensive, now in its third week.
Gaza-based resistance factions, meanwhile, have continued to fire rocket at Israeli cities in response to relentless Israeli bombardments.
Israel's military operation, dubbed operation "Protective Edge," is the self-proclaimed Jewish state's third major offensive against the densely-populate Gaza Strip-which is home to some 1.8 million Palestinians-within the last six years.
In 2008/9, over 1500 Palestinians were killed in Israel's three-week-long operation "Cast Lead."
Last Update: Jul 28, 2014 8:15 pm
RELATED TOPICS