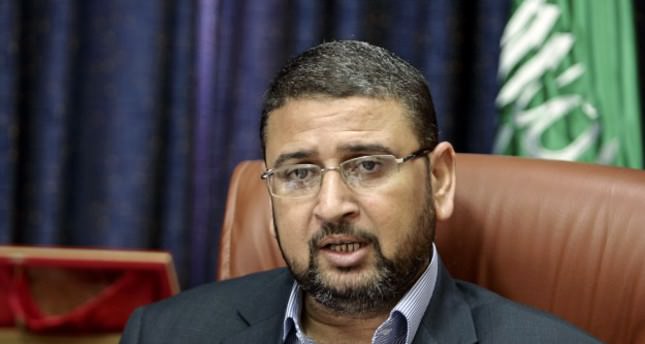 by AA Jul 28, 2014 12:00 am
GAZA CITY—The Gaza-based Palestinian resistance movement Hamas on Monday described earlier statements by Israeli Prime Minister Benjamin Netanyahu that he would launch a long battle against the Gaza Strip as an expression of the "defeat" he experiences at the hands of the Palestinian resistance.

"Netanyahu's threats can do nothing to scare us or scare the Palestinian people," Hamas spokesman Sami Abu Zuhri said in a statement.

"The Israeli occupation will pay dearly for massacring Palestinian children and civilians," he added.

Israel's leaders on Monday threatened Hamas that their country would wage an extended battle against it.

Netanyahu said Israel has to be ready for a long war until the objectives of the current operation against Gaza are achieved.

Ya'alon said he would order the Israeli army to widen the scope of its operations against Hamas in the days to come.

He said the Israeli army would work to prevent Hamas from arming in the future.

Gantz, for his part, said the Israeli army would hit harder at Hamas and also destroy the tunnels of the Gaza Strip.

At least ten Palestinian children were killed and 45 others injured on Monday by Israeli shelling of the western Gaza City Al-Shati Camp, a Palestinian Health Ministry official said.

The official, who asked not to be named, added that the bodies of at least ten children arrived at Al-Shefaa Hospital, having been killed by an Israeli strike on a camp public park.

He added that 45 injured victims had also arrived at the hospital, describing the conditions of some of the victims as "serious".

Since July 7, Israel has pounded the Gaza Strip with fierce aerial bombardments with the ostensible aim of halting rocket fire from the strip, leaving at least 1058 Palestinians dead and more than 6258 others injured.

According to official Israeli figures, 40 Israeli soldiers and seven civilians have been killed since the hostilities began.

Israel's military operation, dubbed operation "Protective Edge," is the self-proclaimed Jewish state's third major offensive against the densely-populate Gaza Strip – which is home to some 1.8 million Palestinians – within the last six years.