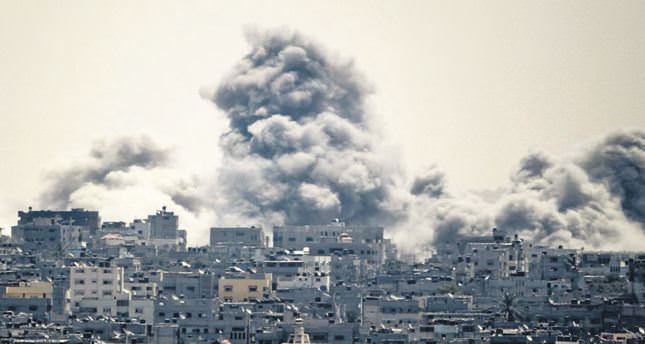 Despite allegations of committing war crimes, directly targeting civilians and allowing explicit racism in the street, Israel and its oppressive regime are untouchable and are forcing Palestinians to keep silent

Millions of Palestinians, having faced decades of neglect from the world despite Israeli crimes, have become used to grieving in silence. Meanwhile, U.S. Secretary of State Kerry, together with FM Davutoğlu, are trying to end the latest round of violence.

Since Israel was officially declared in 1948, Israeli governments have occupied Palestinian lands and refused to remain within the borders recognized by the U.N. In the last few decades, following wars with Arab countries, Israel has expanded its territories by destroying Palestinian homes and displacing residents who are forced to either remain in Palestine or the neighboring countries of Jordan, Lebanon, Egypt and Syria. Although the U.S., U.N. and EU constantly condemn new Israeli settlements and the illegal displacement of Palestinians, the Israeli government pays no attention to the warnings. A European Christian resident of Jerusalem A.C., speaking on the condition of anonymity, told Daily Sabah, "The goal of Israel is to ethnically cleanse the lands and turn it into a Muslim-free zone."

Besides killing and displacing Palestinians, witnesses say daily life for Palestinians is very difficult due to security regulations and mistreatment by not only Israeli soldiers and police but also by Israeli citizens. Z.K., who is 22-years old and a student at the Hebrew University in Jerusalem said, "Every day we are humiliated just because we are Arabs and Muslims. At school, in the street, at checkpoints we are treated like animals.
We can never become friends with Jews as they think we are inferior to them." Z.K. also suffers from the undemocratic structure in Israel and said, "Our every minute is recorded by Israel. If they dislike anything, they can prevent us from travelling to anywhere until the end of our lives or they can demolish our homes without saying anything." A.C. added, "It was the first time I was in Jerusalem during Nakba day, which is commemorated to mark the independence of Israel, but is a huge catastrophe for Palestinians. I was excited to see the mass protests. When I went to an area to observe the protests, there were 20 Palestinians chanting 'Nakba, Nakba, we will return one day.' And there were 60 Jews who were celebrating the independence of Israel and chanting, 'You will never come back.' The Israeli protesters also chanted slogans against Islam, which was quite racist. But obviously any Palestinian cannot defend their religion as Israeli police will immediately arrest them." When asked why there were only 20 Palestinians on such an important day, A.C. said, "The protesters are recorded by the police. So, if anything happens it will be impossible to keep living in Palestine. Therefore, people are just aiming to protect their businesses and families. They do not have big hopes to take their lands back." A.C. emphasized that "Palestinians suffer from a lack of national unity and a charismatic leader. In Jerusalem, last week tens of thousands of people gathered to protest Israeli attacks on Gaza. It was a huge number since the protests were held in very small numbers in the last years. But if there was a leader who could encourage people, everything would be more difficult for Israel." When Z.K. was asked why people do not join the riots, she said in brief, "We are fed up with dying, losing everything, trying to make a new start, we just want to survive." She added that life in Palestine and the domestic political division is different from the way it is viewed abroad.

Israeli oppression forces many Palestinians to keep silent. Yet co-founder of the online news publication, Electronic Intifada, and author of the new book "The Battle for Justice in Palestine," Ali Abunimah, told Daily Sabah, "Israel has no legitimacy in the eyes of the vast majority of Palestinians."
He added, "Israel is illegitimate in the eyes of more people in the world."

However, Israel continues to carry out acts of aggression against Palestinians as operations in Gaza persist apart from pauses during limited cease-fires. As of the weekend, the death toll in Gaza reached 1,060 and the number of wounded passed 6,300.

Israel explicitly violates the Geneva Convention, which bans the targeting of medical centers during war. Israel has not avoided targeting hospitals during the current attacks and also in previous ones. The Israeli Defense Forces (IDF) claim that militants hide weapons under hospitals, but this has not been confirmed by independent sources. In an article published in the Israeli daily Haaretz in 2009, it was quoted that an IDF squad leader told soldiers that "everyone in Gaza is a terrorist."

Israel has been accused of committing war crimes several times. According to an AP report published last week, top Palestinian officials have accused Israel of war crimes in Gaza, filing a complaint last Friday with the International Criminal Court in The Hague. The report said, "Palestinian Justice Minister Saleem al-Saqqa and Ismail Jabr, the Gaza court public prosecutor, started legal proceedings. The officials accuse Israel of war crimes, which they say, under the ICC statutes, include 'crimes of apartheid,' 'attacks against civilians,' 'excessive loss of human life' and the 'crime of colonization.' "

Israel has previously been accused of committing war crimes through consciously targeting civilians, using chemical weapons like DIME (Dense Inert Metal Explosives) and white phosphorus. The cases were brought to the U.N. to be investigated but the U.S. has consistently used its power in the U.N. to slow and even prevent such efforts.
RELATED TOPICS