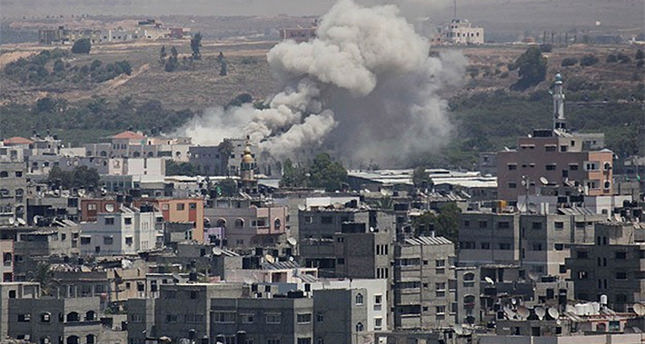 by AA Jul 28, 2014 12:00 am
A deadly Israeli military onslaught on the Gaza Strip has dominated mosque sermons on the first day of Eid al-Fitr, which marks the end of the fasting month of Ramadan, in the West Bank.

Thousands of Palestinians, including Prime Minister Rami al-Hamdallah, showed up early Monday for the Eid prayers in the occupied territory.

Palestinian Authority President Mahmoud Abbas, who is yet to arrive in the West Bank from Saudi Arabia, has not attended the prayers.

He also hailed efforts by the Palestinian Authority to halt ongoing Israeli attacks on the Gaza Strip, which killed more than 1035 Palestinians and injured thousands.

Israel has been pounding the Gaza Strip - which has been reeling under a crippling Israeli blockade since 2006 - from air, ground and sea since July 7, causing massive destruction across the seaside enclave.

Israel claims that the military offensive aims at undermining the ability of Gaza's resistance movements to launch rocket attacks.

At least 46 Israelis-43 soldiers and three civilians-have been killed since the hostilities began.