Hamas: No ceasefire until Gaza siege is lifted 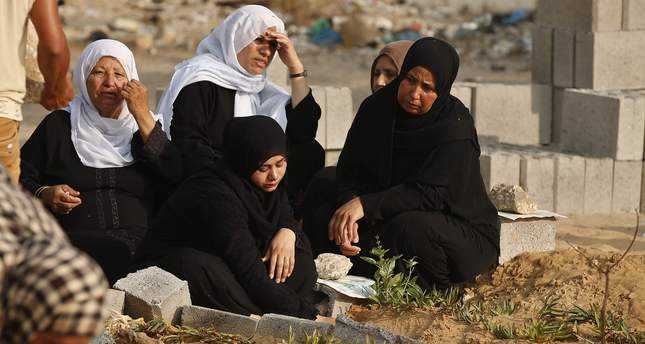 by AA Jul 29, 2014 12:00 am
There will not be a ceasefire in Gaza before Israel stops its aggression on it and also lifts the blockade it has been imposing on the Palestinian enclave since 2006, a senior member of the Palestinian resistance movement Hamas said Tuesday.

"The Zionist state will not enjoy security so long as Palestinians do not enjoy it," Mohammed Deif, the commander of Qassam Brigades, the military arm of Hamas, added in a televised address.

He said Israeli troops have turned into "easy prey" for the fighters of his brigades and their "heroic" infiltration operations.

Qassam Brigades has been leading the resistance to Israel's current campaign on the Gaza Strip, which has been ongoing since July 7.

The brigades claim to have killed scores of Israeli troops and seized their weapons.

Deif said in his televised address that the balance of power has started to tilt in favor of his brigades.

He said his fighters are ready to counter Israel's operations in the Gaza Strip, noting that these fighters work in the light of specific plans.

"The enemy should know that the situation in Gaza is far more difficult than it imagines," Deif said. "It keeps sending its troops to an inevitable inferno by the will of God," he added.

Since July 7, Israel has pounded the Gaza Strip with fierce aerial bombardments with the ostensible aim of halting rocket fire from the strip, leaving 1216 people dead and more than 7000 others injured.

The vast majority of the dead and injured victims are civilians: children, women and elderly people.

According to official Israeli figures, 53 Israeli soldiers and three civilians have been killed since the hostilities began.