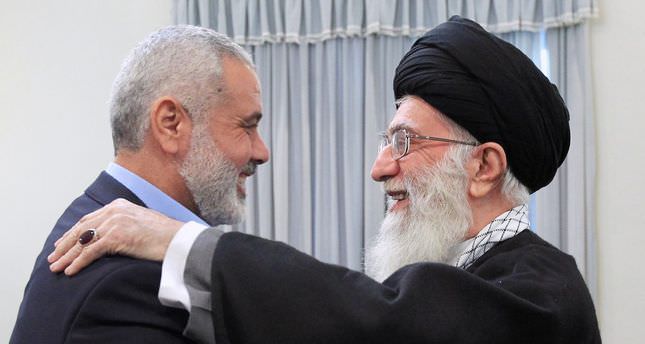 by Jul 29, 2014 12:00 am
Iran's supreme leader Ayatollah Ali Khamenei urged the Islamic world Tuesday to arm Palestinians to allow them to counter what he called Israel's "genocide" in the Gaza Strip.

In a speech marking the Muslim festival of Eid al-Fitr, Khamenei said Israel was acting like a "rabid dog" and "a wild wolf," causing a human catastrophe that must be resisted.

After three weeks of fighting that has killed more than 1,100 Palestinians and 55 Israelis, he sought to pay tribute and rally support to those under attack from Israeli military forces in Gaza.

"A people surrounded in a small place with closed borders, unsure of having water and electricity, this population faces an armed enemy," Khamenei said.

"The people resist unabated. This is a lesson for all," he added in remarks broadcast live from the capital's Imam Khomeini mosque, built in memory of the late founder of the Islamic republic.

Khamenei, Iran's ultimate authority, dismissed talk of a ceasefire, dubbing it a ploy by the United States and European states to save Israel's "Zionist regime".

Hamas should also be re-armed, rather than disarmed, he said, to avoid the Palestinians being unable to defend themselves, and who "with the help of God will win against the enemy".

"The US president issued a fatwa that the resistance is disarmed so that they cannot respond to all those crimes (committed by Israel)," the supreme leader said, referring to Barack Obama's call for the "disarmament of terrorist groups and the demilitarisation of Gaza".


"We say the opposite. The world and especially the Islamic world should arm... the Palestinian people."

Iran does not recognise Israel's existence and supports Hamas that fights it.

At the same event, Iran's President Hassan Rouhani said the Muslim world was beset by "two tumours" -- Israel, and the terrorists of the Islamic State (ISIS), who have grabbed large parts of Syria and Iraq.

After his speech, Khamenei reiterated his appeal for Gaza during a meeting in Tehran with the ambassadors of several Muslim nations, according to comments published on his official website.

"Today, Palestinians need the necessities of life... and weapons and equipment," he said.

"I urge Muslim governments of the countries whose ambassadors are here to join hands to help the people of Gaza."

His comments follow rallies held across Iran Friday in support of the Palestinians and to protest against Israel.

"Any ceasefire must include an end to the blockade of Gaza and a guarantee that the attacks of the Zionist regime will not be repeated," Zarif said.

On Thursday, the speaker of Iran's parliament, Ali Larijani, told state television that Tehran had provided Hamas with the technology it has used to fire rockets from Gaza into Israel.

In the last major conflict in and around Gaza in November 2012, Larijani said Iran was proud to have provided "both financial and military support" to Hamas.

During those clashes, Israel accused Iran of supplying militants with Fajr-5 missiles, which have a range of 75 kilometres (45 miles)