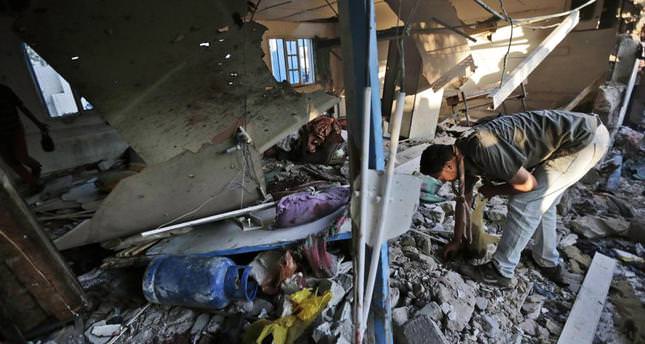 by AA Jul 30, 2014 12:00 am
The death toll from the Israeli shelling of a school run by the U.N.'s Palestinian refugees agency (UNRWA) in northern Gaza Strip in the early hours of Wednesday rose to 15, the Palestinian Health Ministry said.

Al-Qodra added that the attack left around 100 others injured, including many in a serious condition. "The toll could rise in any moment," he said.

The spokesman also regretted "the silence of the international community and the U.N. towards the Israeli crimes against civilians in Gaza."

Eyewitnesses said that body parts of women and children were strewn across the site that used to house dozens of families that had their houses destroyed by the Israeli army earlier this month.

The school was the second such UNRWA facility to be hit by the Israeli army within one week. On Thursday, at least 15 Palestinian civilians were killed when the Israeli army shelled the Beit Hanoun school, also in northern Gaza Strip.

The latest fatalities brought up to 1256 the number of Palestinians killed in the ongoing Israeli military operation in Gaza, al-Qodra said.

Since July 7, Israel has pounded the Gaza Strip-from air, land and sea-with devastating bombardments with the ostensible aim of halting rocket fire from the strip.

Israel claims that the offensive, now in its fourth week, aims at halting rocket fire from the blockaded Palestinian territory.