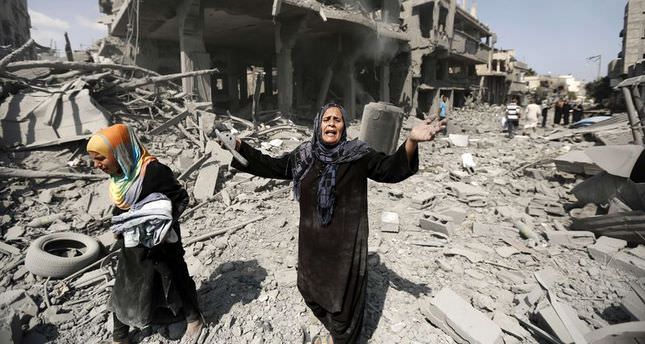 The deadliest strike was at a UN-run school in Jabaliya refugee camp in northern Gaza, with two shells hitting classrooms where dozens of Palestinians were sheltering, UN officials said.

An official from the UN agency for Palestinian refugees put the toll at 16 dead, although there was no immediate breakdown of the victims' identities.

At least six children were killed during the morning, among them an 11-year-old disabled girl who died in a shelling in Gaza City, and a 16-year-old girl killed in a strike on central Gaza.

In the southern city of Khan Younis, a single strike killed nine members of the same family, including one child, Qudra said, and in a later incident, seven members of another family also died as Israeli tank shelling struck the city.

Seven other people died in various attacks across the Gaza Strip as Israeli ground troops made a "significant advance" into the tiny coastal territory which is home to 1.7 million people.

So far, according to Palestinian medics, 1,301 people have been killed and more than 7,200 wounded since the start of the Israeli offensive, which began with an intensive air campaign on July 8 and expanded when Israel sent ground troops into the Gaza periphery on July 17.