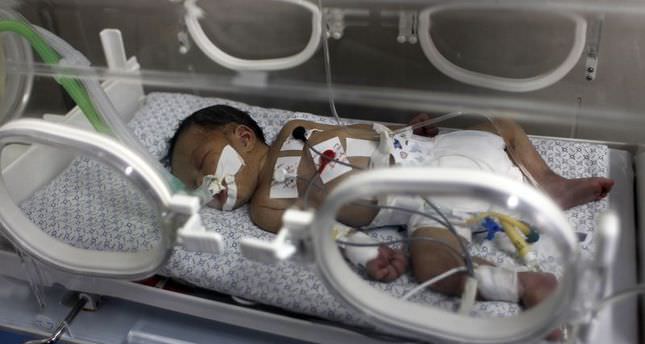 by AA
Jul 31, 2014 12:00 am
Newborn baby Shaimaa Qanan was announced dead on Thursday by Palestinian health officials in Gaza, one week after doctors pulled her out of her slain mother's body following an Israeli strike.

Last week, Shaimaa's 23-year-old mother - who bears the same first name - arrived dead to central Gaza Strip's Deir al-Balah hospital when doctors found out that her unborn girl had still been alive inside her womb.

Thus far, Israel's relentless offensive in the Gaza Strip, now in its fourth week, has left 1390 Palestinians killed, including 290 children, according to Palestinian Health Ministry figures.

Over 8000 Palestinians have also been injured, around half of which are children, according to Palestinian medical sources.

According to official Palestinian statistics, children make up about 60 percent of the densely-populated Gaza Strip, home to some 1.8 million Palestinians.

Launched July 7 with the stated aim of staunching rocket fire from Gaza, Israel's "Operation Protective Edge" is the self-proclaimed Jewish state's third major offensive against the Gaza Strip within the last six years.