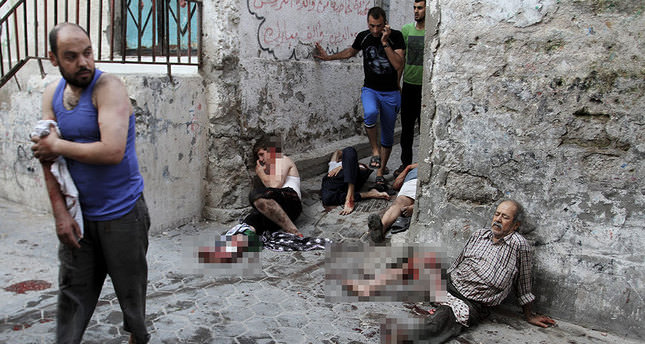 by AA Jul 31, 2014 12:00 am
At least 17 Palestinians were killed Wednesday and over 200 others injured in Israeli artillery shelling of a popular market in Shujaya neighborhood in eastern Gaza City, a Palestinian health official said.

"This is another horrific massacre by the Israeli army against armless civilians in Gaza," Health Ministry spokesman Ashraf al-Qodra told Anadolu Agency.

Eyewitnesses said that dozens of artillery shells hit Al-Bastaat market in Shujaya, leaving dozens killed or injured with body parts strewn in the site. Several shops also caught fire in the aftermath of the Israeli raid, they added.

Al-Qodra said that many of the victims were children and women. A journalist and two civil defense workers were also among those killed in the attack, he said.

The Gaza Strip has been ravaged by relentless Israeli attacks since July 7, leaving 1359 Palestinians-mostly civilians-dead and at least 7677 others injured.

Gaza-based Palestinian factions, meanwhile, have continued to fire rockets at Israeli cities in response to the ongoing Israeli attacks.