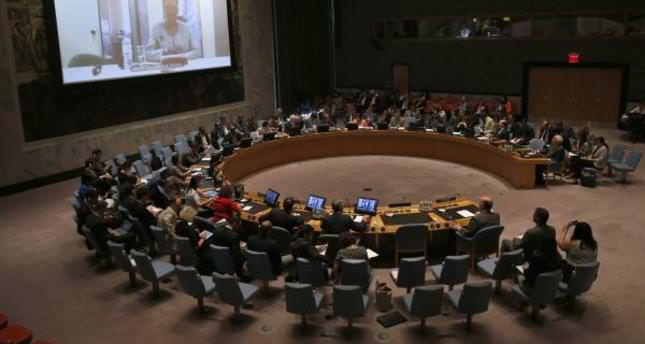 by Jul 31, 2014 12:00 am
The United Nations in Gaza is struggling to withstand a flood of almost a quarter of a million refugees into shelters that have repeatedly come under Israeli fire.

Out of cash, the United Nations Relief and Works Agency (UNRWA), the main U.N. body in the impoverished enclave of 1.8 million Palestinians, says it can barely handle the humanitarian crisis unleashed by more than three weeks of fighting between militants and Israel.

Asked to explain the scale of the civilian suffering to an Arab news station, an UNRWA spokesman simply burst into tears.

"There are times when tears speak more eloquently than words. Mine pale into insignificance compared with Gaza's," Chris Gunness said.

"UNRWA is overwhelmed in Gaza. We have reached breaking point; our staff are being killed, our shelters overflowing. Where will it end ... UNRWA now has 225,178 displaced in 86 shelters. But Gaza is being destroyed. So when the war is over, where will these people go?" Gunness said.

At dawn on Wednesday, Israeli forces shelled a girls' school doubling as a refuge for more than 3,000 people, killing at least 15, including four children, the Gaza Health Ministry said.

Eight U.N. employees have been killed since Israel launched its offensive on July 8 after rocket fire from Gaza intensified. U.N. shelters have been bombed by Israel on six separate occasions, including in another shelling of a U.N. shelter last week that killed 15 people.

Israel said its forces had come under fire from the vicinity of the school on Wednesday and responded. It denies targeting civilians and says militants use innocents as human shields and their neighborhoods as firing positions.

Even in peacetime, the U.N. was under strain to provide food aid to a million Gaza residents, over half the total population.

UNRWA made an urgent appeal for $187 million on Thursday to buy beds and basic supplies for those who fled and to stem the rise of diseases in shelters.

Insecticide and medicine were urgently needed for refugees in the southern Gaza town of Rafah, the U.N.'s humanitarian affairs department said, "to treat epidemics such as lice and scabies, which started to spread in shelters".

Clean water, food and drugs are in short supply and being delivered to refugee families, and the U.N. said hundreds of thousands of traumatized children would need urgent psychiatric help.

The central courtyard of a U.N. school in the city of Gaza has become a teeming refugee camp housing desperate and scared families.

Hundreds of unwashed bodies rendered the air stale. Restless kids played with dolls and kicked around a soccer ball improvised out of a piece of leather. Anxious adults lay in the shade of corridors or cramped classrooms, filled with anxiety.

Samir Al-Tumi, 60, said he and his family were planning to leave and take their chances in their home neighborhood of Beit Lahiya in the northern Gaza strip, despite ongoing battles there and Israeli army warnings for locals to leave.

"I feel I would be safer outside the UNRWA school ... I prefer to take my family and return to my house and die there instead of dying here," he said.

Tumi echoed the sentiments of many refugees there when he said he believed world powers had failed them and had allowed innocent people to be killed.

"I urge the United Nations Security Council, be merciful to our children, not to us - we are adults and maybe we have done mistakes in our life - but what about those children, what could they be guilty of?" he said.

The U.N. has urged the immediate conclusion of so-far fruitless regional talks for a ceasefire and suggested the mass deaths at its facilities were cause for Israel to be investigated for the attacks on its schools.

"We have moved beyond what humanitarian action alone can deal with. This is now the time for political action. It is the time for accountability," UNRWA's chief Pierre Krähenbühl told reporters in Gaza's main hospital on Thursday.

"The attack on the Jabalya school ... is probably one of the most tragic protection failures that the international community has witnessed, immediate ceasefire is needed to save lives, but it is not enough. The illegal blockade of Gaza must be lifted." he added.