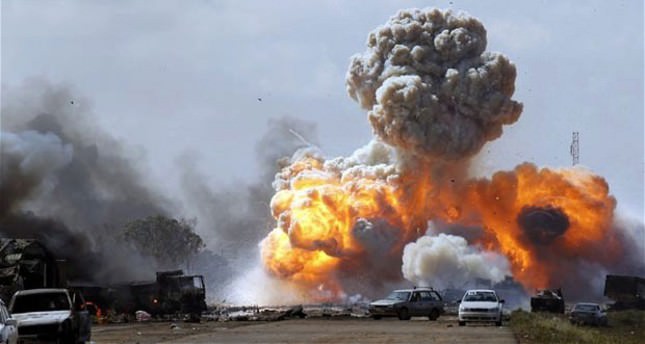 by Aug 01, 2014 12:00 am
Heavy shelling resumed on Thursday in southern Tripoli as many countries including China, the Philippines and Greece ordered their citizens and consulate staff to leave Libya due to the increasing clashes. In Tripoli, rival militia brigades were battling for control of the capital's main airport in some of the worst clashes since the 2011 revolt which ousted Moammar Gadhafi.

Around 200 people have been killed since the clashes erupted two weeks ago in the capital and also in the eastern city of Benghazi, where a coalition of Islamist militants and former rebels have overrun a major army base in the city.

Thuds of artillery and anti-aircraft cannons echoed across Tripoli from early Thursday morning, a day after a temporary ceasefire agreed by factions to allow firefighters to put out a huge blaze at a fuel depot hit by a rocket. Three years after the fall of Muammar Gaddafi, Libya's fragile government and nascent army has been unable to impose authority on heavily armed brigades of former rebels who have become the North African country's powerbrokers.

Most of the fighting is limited to southern Tripoli where warring factions have exchanged Grad rockets, artillery shells and cannon fire between the airport controlled by Zintan brigade fighters and enclaves of their Misrata brigade rivals. In the eastern city of Benghazi, an alliance of Islamist militants and former rebels has also overrun a Special Forces base in the city, forcing the army into a retreat, local residents and army officials said. Residents said there was little sign of the army or police on the ground in Benghazi on Thursday, two days after Islamist fighters from Ansar al-Sharia and the coalition of former rebels the Benghazi Shura Council overtook a main Special Forces base.