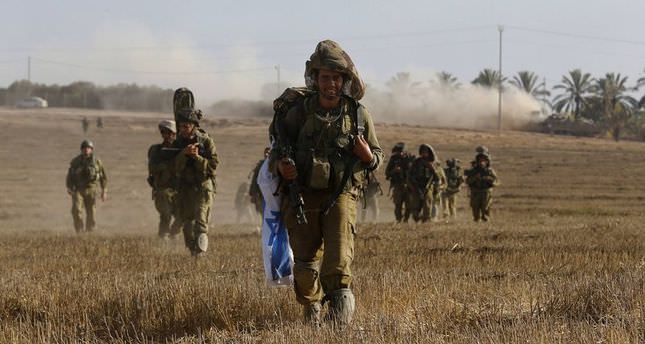 by AA Aug 01, 2014 12:00 am
The Israeli army on Friday confirmed that an officer was kidnapped Friday in an attack by Palestinians in the Gaza Strip, during which two others soldiers were killed.

In a statement, the military identified the kidnapped soldier as Second Lieutenant Hadar Goldin, 23, from the Givati Brigade.

Two other soldiers were killed in the attack, it added.

Earlier in the day, the army spokesperson's office said that "terrorists" opened fire on Israeli forces at about 9:30am as soldiers were operating to decommission a tunnel in southern Gaza Strip.

"Preliminary information indicates that there is a concern that a soldier was kidnapped during the fighting," the army added.

The announcement came shortly after an Israeli official said on Friday that a 72-hour humanitarian ceasefire in the Gaza Strip had collapsed.

But senior Hamas leader Moussa Abu Marzouq said that the Israeli officer was captured and two soldiers were killed ahead of the start of the Gaza ceasefire.

"There is no justification for Israel to violate the truce as the officer was captured and the two soldiers were killed ahead of the truce," Abu Marzouq told Anadolu Agency.

He said that Palestinian factions were abiding by the truce and were only responding to Israeli "aggression".

Israel has been pounding the Gaza Strip for almost four weeks, which killed at least 1458 Palestinians and injured more than 8300 others.

According to Israeli figures, at least 61 soldiers have been killed in battles with Palestinian fighters and three civilians by rocket fire.