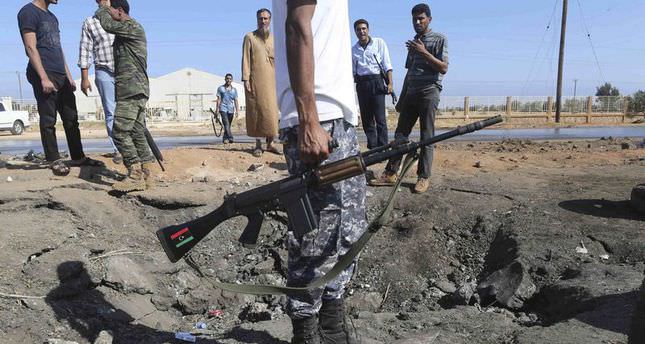 by Associated Press Aug 01, 2014 12:00 am
A strong explosion ripped through the main police building in Benghazi early Friday, nearly flattening it, days after militias overran army barracks and claimed control of the eastern Libyan city.

The police headquarters has been empty for several days after militias pounded it with shelling. The blast, which was heard across Benghazi and shook houses in surrounding area, appeared to be from explosives planted in the building, the witnesses at the site said. Police officials in Benghazi, Libya's second largest city, could not be reached.

A coalition of militias over the past week captured a number of army bases in Benghazi, Libya's second largest city, driving out troops and police and seizing large weapons stores. The fighting takes place at a time that rival militias in the capital, Tripoli, have been battling for weeks over control of its airport.

The spiral of violence in the country's two main cities could be sparking a popular backlash, with calls for large rallies on Friday to protest against militias and demand the return of the police and military.

"It's time for a popular uprising to rescue Libya," said Abdel-Moneim al-Yassir, a lawmaker in the outgoing parliament and head of its National Security Committee. He called for protests on his Facebook page, saying they were "the only solution ... to put an end to the situation by disarming and demobilizing militias under a national accord."

The Tripoli violence was sparked in early July when militias originally from the western city of Misrata, which are allied to Islamist politicians, carried out a surprise attack on militias from the western town of Zintan who control the airport. The move was in retaliation for a months-long campaign aiming to crush Islamic militias being waged by army troops led by a renegade general, Khalifa Hifter.

The battles have destroyed parts of the airport, and shelling earlier this week hit three oil depots, sparking a raging fire that firefighters have struggled to put out amid the continued fighting. The National Safety Agency, which oversees emergency services, said Friday that one depot is still on fire. The violence led to a mass evacuation of foreign nationals and Libyans alike and left the capital and Benghazi suffering from fuel shortages and power outages.

The fighting in Tripoli and Benghazi is seen as a push by Islamists and their allied militias to shift a longtime balance of power among Libya's many militias. The militias emerged after the 2011 civil war that led to the ouster and death of Moammar Gahdafi. Since then, the central government, police and military have largely had no authority.